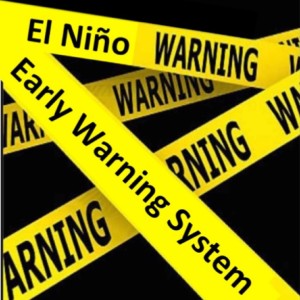 Many countries, especially those in ENSO affected areas can now use seasonal climate
variability predictions for timescales up to
about two seasons. This breakthrough has
largely been due to a 10 year project of WCRP,
the Tropical Ocean/Global Atmosphere (TOGA)
study. The major challenge, besides improving
the forecasts through, for better understanding
of monsoons, is the involvement of user groups
at early stages in order to fully exploit the value
of long-term forecasting of climate anomalies
which has brought a new dimension to early
warning (e.g. droughts, floods, etc.). There is
now a chance for more rapid development in
areas hitherto suffering greatly from large natural
climate variability.

A workshop in Ecuador on “El Niño Early Warning for Sustainable Development in Pacific Rim Countries and Islands ” was inspired by the deliberations of an earlier workshop held in Shanghai, China in October 2003 on Early Warning Systems: Do’s and Don’ts. The Galapagos workshop was the ninth “Usable Science” workshop organized by CCB in a ten-year period. Several of the Usable Science workshops were linked to various aspects related to El Niño: forecasting, impacts, responses to forecasts and responses to impacts of El Niño, and the extreme meteorological events that an El Niño often spawns. The goal of the Galapagos meeting was to regionalize early warning systems geographically and to focus on a specific climate-related phenomenon: El Niño. El Niño is known with varying degrees of reliability to spawn climate- and weather-related hazards in many parts of the globe. Even general knowledge of El Niño, coupled with El Niño forecasts and impacts maps, provide one of the earliest warnings of possible climate-related impacts problems that government decision makers or managers of climate-sensitive industries might receive in time to take action. Early warning systems (EWSs) gain a lot of attention during or following a disaster, though their value to society has been known for a long time and well documented at least in terms of lives saved. EWSs for El Niño are of great interest to the applied research communities.