El Niño and La Niña are officially defined as sustained sea surface temperature anomalies of magnitude greater than 0.5°C across the central tropical Pacific Ocean. When the condition is met for a period of less than five months, it is classified as El Niño or La Niña conditions; if the anomaly persists for five months or longer, it is classified as an El Niño or La Niña episode. Historically, it has occurred at irregular intervals of 2-7 years and has usually lasted one or two years.These periods often coincide with the transition between El Niño and La Niña events. During ENSO-neutral periods the ocean temperatures, tropical rainfall patterns, and atmospheric winds over the equatorial Pacific Ocean are near the long-term average. 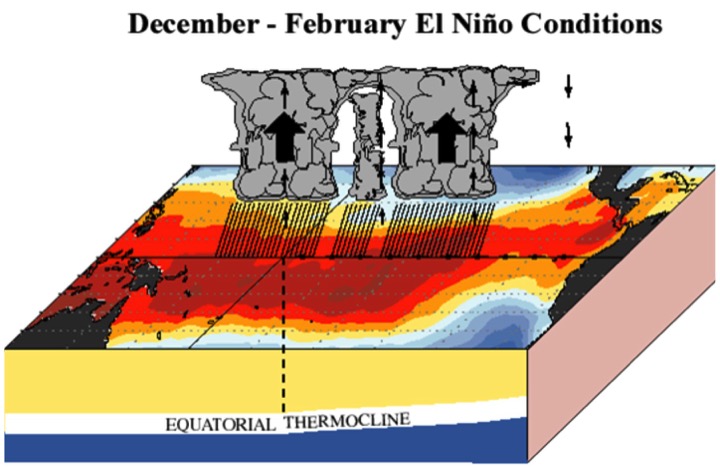 What Causes an El Niño?

During El Niño, the following conditions are likely:

This animation is an exciting new tool to raise awareness of the science and impacts of El Niño and La Niña and encourage Pacific Islanders to take early action in preparing for these extreme events.

The film stars a comical and highly resilient crab and follows her escapades across the Pacific.

The Pacific island countries can experience very wet or very dry conditions as a result of El Niño and La Niña. These conditions, along with extreme events like cyclones, can have serious impacts on water quality, food security, infrastructure (like houses and roads), livelihoods and health. However, good quality climate and weather information, warnings and forecasts can help us anticipate and prepare for changing risks.

The animation comes with a resource ‘tool kit’ to help facilitators link the information in the film with smart decision-making and action on the ground.

You can download The Pacific Adventures of the Climate Crab animation and screen it in your community or workplace.