Aside from the unique needs of each specific country to cope with its hydro-meteorological hazards, their NMHSs, generally speaking, are likely to have common (similar) basic needs to fulfill their core operational responsibilities to their societies. 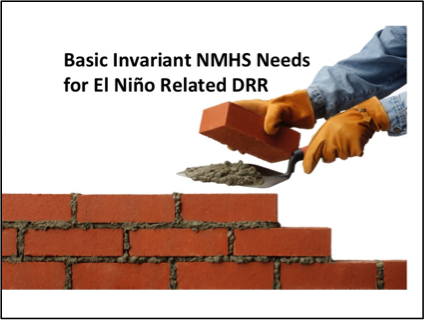 Those common basic needs will likely vary to some degree from one country’s perspective to another, leaving it up to each NMHS to determine the degree of its country’s readiness to effectively cope with El Niño and its consequences. From the World Bank’s perspective, the NMHS assists not only in providing forecasts of varying weather on different time scales (days to months) but it is also central to the country’s economic development prospects by not only advising, but also serving the needs of different economic sectors. For example, an NMHS is expected to provide data that is required by various agencies and socioeconomic sectors for the purpose of their growth, development and sustainable well-being. As Tsirkunov and Hancock (n.d.) noted, “There has been a growing understanding at the [World] Bank that NMHSs comprise an important, self-standing public sector that generates data critically important for public safety [emphasis added] and economic development, an appropriate primary target of support from international financial institutions.”

According to Rogers and Tsirkunov (2013), commenting on the modernization of NMHSs, “Large-Scale Modernization programs should typically include three components: (1) “Institutional strengthening, capacity building, and implementation support; (2) Modernization of observation infrastructure and forecasting; (3) Enhancement of service delivery system.”

It becomes quite clear that #4, the GFCS, requires the involvement of staff within an NMHS whose experiences and expertise are rooted in the social sciences.

Efforts to modernize the US National Weather Service (NWS) have been called for and then embarked on over the past couple decades. In 2012 a published National Academy of Sciences report reviewed efforts undertaken toward the modernization and reconstruction of the US NWS. A study of this report could provide instructive input into modernization efforts because it noted successes and shortcomings in its decades-long modernization effort. It showed that even a well-to-do, resources-rich country encountered constraints in meeting its basic invariant needs to serve society.

The following list was drawn from the Lessons Learned section (Chapter 5) of that NAS report. The list is meant to be illustrative and not definitive of what might generally be needed by an NMHS to work toward developing an El Niño ready nation. “The fact that they [lessons] are common makes it even more important that they be considered in future planning” (NAS, MAR, 2012, p. 73).

Do the NMHSs have the tools (technology, personnel, expertise and institutional culture etc.) to meet those basic needs in order for each one to fulfill its responsibilities to its society? Do they have as yet the “absorptive” capacity to use the advanced technologies and techniques to effectively meet at least those essential needs? A checklist of explicit, all-encompassing needs by an NMHS can provide the needed capacity to create an El Niño Ready Nation. It would be best for the NMHSs (and NMSs and NHSs) to identify their own basic needs. From those we can identify the truly basic invariant needs of all such national services.

This section of a proposed El Nino Ready Nations (ENRNs) website draws heavily on the reports of the World Bank Group’s Global Fund for Disaster Risk Reduction (GFDRR) and of the WMO. In fact the book by Rogers and Tsirkunov (2013) entitled “Weather and Climate Resilience: Effective Preparedness through National Meteorological and Hydrological Services” provides a lot of information about the state and needs of NMHSs in order to bring their services to societies up to early 21st century standards. The opening statement of this book succunctly captures the GFDRR/WMO concern about NMHSs today and the need for modernization efforts in the future. 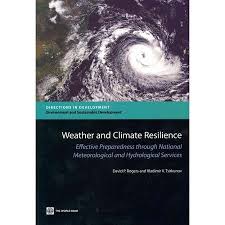 “Faced with the growing risks of weather and climate disasters to economic and social development, the global community needs to act quickly to strengthen NMHSs. This strengthening should be done in a way that transforms weak agencies — especially in the developing world — into robust professional agencies capable of delivering the right information to the right people at the right time. Although the price tag of modernizing and sustaining NMHSs will be considerable, the rewards for the country and its citizens will be much higher…these recurrent costs should be covered by national governments, but few are ready to do so.” (p.3)

The authors go on to note “The key players are the NMHSs, which are the backbone of the global weather and climate enterprise…[T]hey are the government’s authoritative source of weather, climate and water information, providing timely input to emergency managers, national and local administrations, the public, and critical economic sectors.” They also lamented “NMHSs modernization efforts in the developing world have achieved only limited success so far….”

A joint report by the WMO and the GFDRR on modernization efforts noted:

“Since the mid-1980s, the World Bank has prepared and implemented more than 150 operations with some elements supporting NMHSs, but relatively few were aimed at modernizing the whole system. Rather, the investments were structured as small-scale activities within water resource management, agriculture, or emergency operations. The approach was often piecemeal, emphasizing efforts to patch up services by supplying individual sensors and partial systems, without a strong connection with the national meteorological services or users. But since the mid-1990s, the focus has shifted toward development of a more holistic approach.” Report Here

Modernization efforts today apparently seek to upgrade NMHSs by bundling together (an holistic view) all of a country’s hydromet threats/hazards that could conceivably affect a country over a long period of time and then modernizing the NMHSs to meet all of the challenges associated with that bundle of hazards. However, reading various documents related to modernization exposes the reality that not everyone sees modernization of the NMHSs in the same way.

Synonyms for the term “modernization” can be divided into two clusters:

(2) ‘Bringing up to date;’ improve, rejuvenate, remake, renovate, restore, revamp, revive, update, regenerate and refresh as well as the more directed goal to “bring it into the 21st century.”

Thus, to those who see modernization as being focused on maximizing the scientific capabilities of an NMHS, it may refer only to achieving the state of the art levels of technology and training. Yet, what a technologically oriented service might view as its important needs for saving lives, livelihoods and property, policy makers might not. But modernization could also refer to upgrading or strengthening existing levels to higher levels but not to the best level possible (e.g. “satisficing”). It could refer to bringing an NMHS to a mutually acceptable (passable) “good enough” level of technology and capacity to meet minimum standards. Who is in the best position to determine if an NMHS is “paying its way” in a society by enhancing societal and environmental well-being? What is the ideally modernized NMHS, as visualized by the GFDRR and to the WMO? Practice will surely differ from what can realistically be achieved.

The Modernization of an NMHS in Parts

In a report on “Weather and Climate Resilience”  the opening sentences of chapter 6 (“Guidance on Modernizing NMHSs”) made the following assertion:

“Modernizing NMHSs cannot be piecemeal. The process should be transformative, ensuring that NMHSs can deliver the services that their stakeholders expect. Partial modernization of observation networks [for example] tends to have little effect if the NMHSs cannot produce better forecasts and deliver more accurate warnings.” (p.121)

Such a view may be correct when dealing with a technical system in which the various components are interdependent, such as the technical aspects of an early warning system. However, I discovered an interesting notion in a political science book “Peace in Parts.”  The author of Peace in Parts, Joseph Nye, was focused on using regional political organizations to reduce interstate conflicts in a given region. He called for region-focused peace efforts in a regional conflict situation and going after a resolution by using the desired amount of force (resources) to win the conflict. Efforts are focused on a specific conflict, place, and time, as opposed to a general, well meaning pursuit of “World Peace” aa a hoped for but distant, ever out-of-reach, objective. To focus on peace worldwide among 200 nations would end up spreading already scarce resources so thin as to have little effect on resolving any conflict situation.

The idea of “El Niño ready nations” is similar in intent to Nye’s “Peace in Parts.” It provides a logical way to modernize an NMHS in parts. It involves focusing on a set of El Niño-affected countries or regions measuring their vulnerabilities to common (foreseeable) El Niño hazards. [NB: If successful, the next concept would be applied to “La Niña ready nations.” A similar approach can be taken using our La Niña ready nations website to continue pursuing NMHSs modernization in parts. La Niña is the “cold phase” of the ENSO and it spawns a different set of anomalies around the globe. Because El Nino events occur 1/4th of the time and La Nina events another 1/4th of the time, focusing on them can go a long way toward modernization.

Modernizing NMHSs is a process with many elements and complex feedbacks. Many countries (mainly in the El Niño prone regions) already have structures and systems created to cope with El Niño regardless of the level of development of its NMHS. In these cases readiness could be reached even before an NHMS modernization process is developed. The important point is that El Niño ready nations, weather ready nations and the NHMS modernization have strong connections because they are a part of the same process.