Crosscutting Themes (From ENRNs and DRR, 2016) 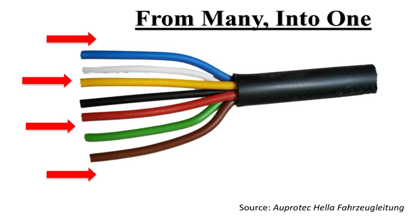 (Based on the Portal/ENRNs Project’s 15-country, city and region case studies)

Each of the 15 country studies exposed issues of concern raised by the research teams. CCB clustered several but not all of those key concerns into six general categories, each of which highlights challenges to decision makers in policymaking as well as in forecasting El Niño and for generating El Niño Readiness at national to local levels:

Though the categories are general in nature, they encompass basic needs of societies and foreseeable opportunities for country-appropriate responses to El Niño forecasts and potential impacts on either a strategic or a tactical basis.

The characteristics of the El Niño phenomenon itself are problematic for decision makers and scientists as well as forecasters. When civil society hears about El Niño, it is usually from electronic and print media headlines about an impending El Niño episode or about the devastation of its impacts somewhere on the globe. Once a forecast of an El Niño’s onset and subsequent forecasts are in play, they receive scrutiny from the media: Are the El Niño forecasts accurate? Are the projections about intensity or location on target? Are the impacts playing out as scientists suggested?

Forecasting El Niño is still partly science and partly art. Mysteries remain in understanding the phenomenon. A close look at El Niño reveals various uncertainties about its characteristics in terms   of   air-sea   interactions   in   the

equatorial Pacific. Uncertainties are also introduced from the influences on El Niño of other surrounding air-sea oscillations. These uncertainties working together determine the societal and environmental impacts during a specific El Niño episode.

El Niño characteristics can affect decision makers’ perceptions about when or even whether to prepare for a specific El Niño (tactical) or to prepare for all events in the long term (strategic). They include but are not limited to the following: 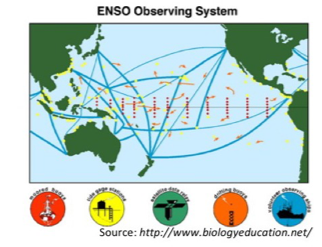 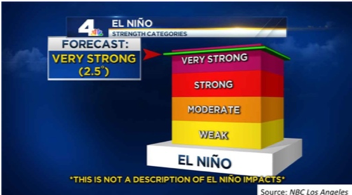 El Niño information typically reaches the general public by way of media reports about forecasts of an El Niño’s onset. People respond to them in different ways: to act or not to act becomes the question for decision makers to answer. Forecasts, however, are based on probabilities as a quantitative expression of the likelihood of occurrence. Forecasts implicitly come with a “buyer beware” notice.

NMHSs are central players worldwide when it comes 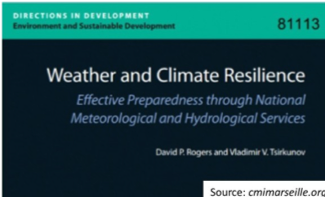 to monitoring ENSO’s warm extremes and teleconnected hydromet impacts. While various NMHSs may have the necessary technological tools and personnel to directly monitor the SSTs in the tropical Pacific, many do not. Even though an NMHS has not yet become modernized to its desired level, it should at least have the personnel, training and equipment needed to track and follow up on an El Niño from timely forecasts and reports issued by any of the reliable regional and international centers. 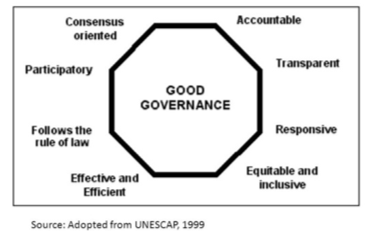 reduction (DRR) activities in the same way they are central to sustainable development planning.

“Governance” is a term first used in the fourteenth century and defined generally as “the act or manner of governing.” The 15-country case studies identified various aspects of governance that can affect, favorably or adversely, decision making related to El Niño.

Governments determine when to plan, to act, whether to react or pro-act, how to react or pro-act, and whether to allocate funds. They can make funding available for strategic El Niño preparedness in advance or for after-the-fact response to and recovery from impacts attributed to an event’s climate, water and weather anomalies.

The bullets that follow are suggested for improving the governance of DRR- related issues. 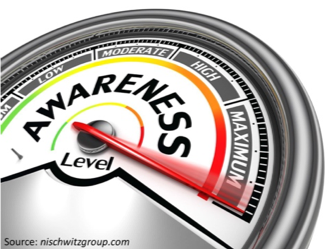 be an on-going process that requires constant reinforcement and re- visits as new scientific information becomes available. However, awareness- raising often turns out to be little more than a one-time education or training workshop in different locations. Such efforts, while admirable, are not enough to develop let alone sustain a higher level of awareness.

Awareness of and obstacles to accessing knowledge about El Niño is a necessity, because El Niño is a potential life and livelihood threatening hydromet hazards- spawner. However, as a quasi-periodic event, it is not a constant annual concern to governments or civil society. At the least government agency and community decision makers along with the “attentive public” merit special, priority attention in the awareness-raising process. 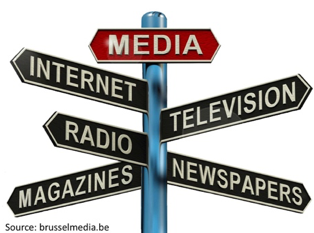 People seem to have a tendency to focus on the last big climate, water or weather disaster (a drought, flood, hurricane, or severe storm). The same holds true for the media. However, looking back to the last big disaster of the same type may not provide the best insight about likely impacts for an upcoming event.

Science reporters, like the public and policy makers, must, however, look at more than just the last El Niño in order to provide its readers or listeners with a glimpse of possible impacts that could accompany El Niño.

Summary of the Executive Summary

This project merged two related activities, one planned and the other an unforeseen opportunity. The 1st activity was the lessons learned portal project which involved a desktop review of the literature on web-based platforms involving the various stages of developing a portal: soliciting, collecting, cataloging, archiving and the open- access sharing of recommendations and lessons related to hydro-meteorological hazards and disasters.

In theory, a portal would enable lessons from countries around the globe to be made available in an open-access, web- based platform to all countries in an effort to promote lessons learning from societal and governmental examples or preparations for and responses to  past and ongoing hazards. This portal project was based on the premise that “lessons learned” have really for the most part been “lessons identified,” since many of those lessons go untested or unused. Successive similar disasters seem to produce similar lessons, raising serious questions about the process of so called “lessons learning.”

A “lessons learned portal” for sharing experiences and concerns is a great idea. In practice, however, it is not such a straightforward and assured benefits- producing endeavor. Starting such a portal requires a commitment to support it well into the future. Many portals are started for different types of  activities and for good reasons, but have short lifespans due to waning interest, lack of a sustained funding stream or lack of use.

The 2nd activity was focused on El Niño Ready Nations (ENRNs). The idea behind the notion of El Niño Readiness for nations, cities, NMHSs and islands is to identify ways that lessons identified for coping with ENSO’s warm or cold extremes are collected, archived, evaluated, field tested, and applied in ENSO-related DRR efforts at national to local levels. When it comes to El Niño or La Niña, impacts for the most part are of national concern. Thus, there is likely a nation-bias about responding to the consequences of ENSO’s extremes.

Human nature is a factor that must also be considered. People tend to first recollect the most recent hydromet hazard as being the most important for lessons learning. National bias and discounting the past (that is, putting less value     on     the     use     of    historical information) often lead to the view that a portal should be developed at the national level primarily for the in- country sharing of lessons and, secondarily, for the sharing with other countries that might have to cope with similar hydromet hazards.

The 15 country case studies in this Portal/ENRNs project encompass different political systems, cultures, socio-economic and political settings from around the world. Each country study has its own set of lessons identified and learned, influenced by its  own unique set of national and  regional factors influencing its hydromet  DRR- and drr-related policies in general. As these country cases have shown, however, when compared side by side, common interests and concerns emerge. Some of the common aspects were noted in the previous crosscutting themes section as to the range of national best practices related to DRR from which numerous countries could learn what other countries considered to be best practices to improve their own readiness by preparing for and coping with hydromet hazards and disasters.

Fostering awareness activities with regard to learning lessons in general and about lessons learning for specific disasters is the responsibility of a country’s political leaders. It can also be seen as a responsibility of donor organizations that fund El Niño-related DRR projects. Governments should take up the responsibility to develop and maintain a web-based platform (perhaps with the help of the donor community), a platform  that  involves  the  soliciting, collecting, cataloging, archiving and sharing of lessons and recommendations related to hydro-meteorological hazards and disasters. Each government should openly share its lessons and should have access to other governments’ national lessons portals.

The value and importance of national meteorological and hydrological services have grown sharply in the last couple of decades, as climates’ influence on human activities have expanded beyond what were once considered their normal boundaries. National approaches to lessons learning can be yet another activity of an NMHS. With commensurate funding to undertake this mission and working with universities, an NMHS can gather and truly apply lessons related to El Niño and La Niña as well.

As a final comment, the list of crosscutting themes in the previous section may viewed too general and even obvious for specific action-taking. However, these are areas that must be addressed, if progress is to be made on generating interest in making one’s nation El Niño-ready.