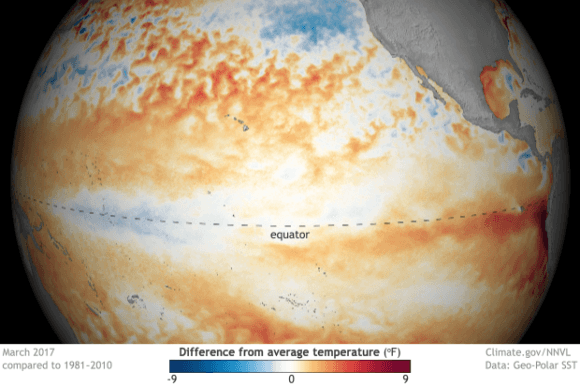 El Nino conditions are developing across the Pacific with an increasing probability that a full-fledged El Nino episode will occur during the second half of 2017.

Pacific equatorial winds have slackened since the start of the year and a characteristic tongue of warm water has begun to form stretching from Peru towards the international dateline.

Both are consistent with the development of El Nino and are likely to strengthen during the second and third quarters.

The U.S. government’s Climate Prediction Center (CPC) last month forecast El Nino conditions would prevail by the end of the northern hemisphere summer, but put the probability at only 50 percent.

Most El Nino indicators have strengthened since then so the probability is likely to be revised higher when the CPC issues its next forecast later in May.

But the strength of any future El Nino remains highly uncertain as does its impact on temperatures and precipitation across North America this winter.

El Nino and the Southern Oscillation (ENSO) describe closely linked oceanic and atmospheric processes that stretch across the Pacific and the neighboring maritime continent of South East Asia.

The oceanic component sees cold water well up from the deep ocean off the coast of Peru and move west across the Pacific carried on the surface equatorial current.

There is a return flow of warm water eastwards across the Pacific on countercurrents to the north and south of the equator and also on an equatorial undercurrent deeper in the ocean.

The atmospheric component sees warm moist air rise over the maritime continent and western Pacific, then flow east through the upper atmosphere towards South America.

The air cools and sinks over the colder waters off South America, before returning towards Asia in a steady westward flow known to mariners as the trade winds.

The oceanic and atmospheric circulations are coupled, with the equatorial winds helping drive the surface equatorial current, and sea surface temperature differentials reinforcing the rising and falling air columns.

But the strength of the circulations and the degree of coupling varies at seasonal, annual and inter-annual scales.

When the circulations are particularly strong and tightly coupled, the equatorial winds accelerate, the equatorial current picks up and colder than average water is carried further from the Peru coast towards the dateline.

When the circulations are weak and uncoupled, the winds slacken, the current slows and warmer than normal water extends from Peru to the dateline.

The stronger, cooler phase of this cycle is termed La Nina while the weaker, warmer phase of the cycle is El Nino (“El Nino, La Nina and the Southern Oscillation”, Philander, 1990).

ENSO cycles back and forth between strong and weak phases with an average periodicity of 3 to 4 years but with repetitions varying from as little as 2 years to 7 or even 10 years.

ENSO effects tend to be weakest during March and April when the cycle is most likely to start transitioning from El Nino to La Nina or vice versa.

Effects tend to strengthen as the year progresses and peak between October and January, when El Nino or La Nina becomes most intense.

The atmospheric and oceanic circulations that lie at the heart of ENSO involve very large thermal masses of air and water which means they exhibit a lot of short-term persistence.

The short-term stability (especially the thermal stability of the ocean) makes the ENSO cycle somewhat forecastable.

The trickiest time of year to make forecasts is during the first quarter of the year when ENSO effects are weakening and the possibility of a phase transition (from El Nino to La Nina or vice versa) is greatest.

By the second and third quarter, the oceanic and atmospheric circulations are likely to become locked in either a strong/cool or a weak/warm phase which makes forecasting to the end of the year more accurate.

While forecasters have had a fair amount of success in predicting phase shifts in ENSO, forecasting the strength of an El Nino or La Nina episode has proved much harder.

El Nino and La Nina episodes vary enormously in their intensity. The winter of 2015/16 saw an unusually intense El Nino but it was followed by a very weak La Nina episode in 2016/17.

Forecasts for the development of the ENSO cycle and its intensity are based on observations of the strength of the oceanic and atmospheric circulations.

Sea surface temperatures in the central-eastern Pacific, an area known as Nino region 3.4, have warmed much more quickly than normal since January and are now above the long-term seasonal average

More recently, pressure differentials between Indonesia and the eastern Pacific, measured by the Equatorial Southern Oscillation Index, have started to weaken, and the equatorial winds have slackened.

The components for El Nino are all now in place and ENSO is clearly transitioning from a strong/cool to a weak/warm phase.

But as the signals are still weak it remains uncertain if they will strengthen sufficiently to qualify as a full-fledged El Nino episode later in the year.

ENSO has a major impact on temperatures and rainfall around the Pacific and Indian basins and a smaller impact on the Atlantic basin.

But the main effects are felt within the tropics, with a much more limited effect on weather outside the tropics in the mid-latitudes.

Researchers have found links between ENSO and temperatures and precipitation in some parts of North America owing to its impact on the position of the Pacific and polar jet streams.

ENSO’s impact on the United States tends to be regional rather than national. Higher temperatures in some areas are offset by lower ones in others (“North American precipitation and temperature patterns associated with the El Nino/Southern Oscillation,” Ropelewski et al, 1986).

El Nino tends to be associated with a warmer than normal winter in the Pacific North West of the United States and Canada, and a colder and wetter winter in the U.S. Southwest and Southeast.

La Nina tends to bring colder and wetter weather to the Pacific Northwest but dry and warm conditions to the U.S. Southeast and U.S. Southwest.

ENSO is not the only atmospheric circulation that drives temperature and precipitation across North America so the impact tends to be felt clearly when El Nino or La Nina are especially strong.

Temperature and precipitation in North America and Europe are more driven by the Arctic Oscillation/North Atlantic Oscillation (AO/NAO) and to some extent its interaction with ENSO.

ENSO impacts tend to be visible only when ENSO is particularly strong (for example the strong El Nino of 2015/16) or when ENSO and other circulations reinforce rather than counter one another.

If El Nino develops later this year it should bring warmer temperatures to Washington state and neighboring areas but colder, wetter weather to a belt of southern states stretching from California through Texas to Florida.

The exact impact depends critically on the strength of the El Nino phase and its interaction with nearer atmospheric and oceanic circulations, which remain impossible to predict this far out.