Indonesian fires are pouring huge amounts of carbon into the atmosphere

A fishing village is blanketed in haze in Indonesia after slash-and-burn agriculture practices and unusually dry conditions led to uncontrollable fires. (Reuters)

Last week, I noted a staggering statistic: Raging fires in Indonesia — the result of both this year’s El Nino event and the clearing of forests and draining of peatlands — have apparently given off as much carbon dioxide to the atmosphere as Germany does in a year by burning fossil fuels. The key reason is that about half of the fires are burning on carbon packed peatlands.

“Taken together, the impact of peat fires on global warming may be more than 200 times greater than fires on other lands,” wrote four researchers with the World Resources Institute recently.

Unfortunately, it appears that since last week, the fire situation in Indonesia has only worsened — and so have the emissions. Forget Germany, the emissions are now equal to Japan’s, based on estimates by Guido van der Werf, an expert on wildfire emissions at VU University Amsterdam in the Netherlands. Here’s a figure from van der Werf, showing the latest calculations: 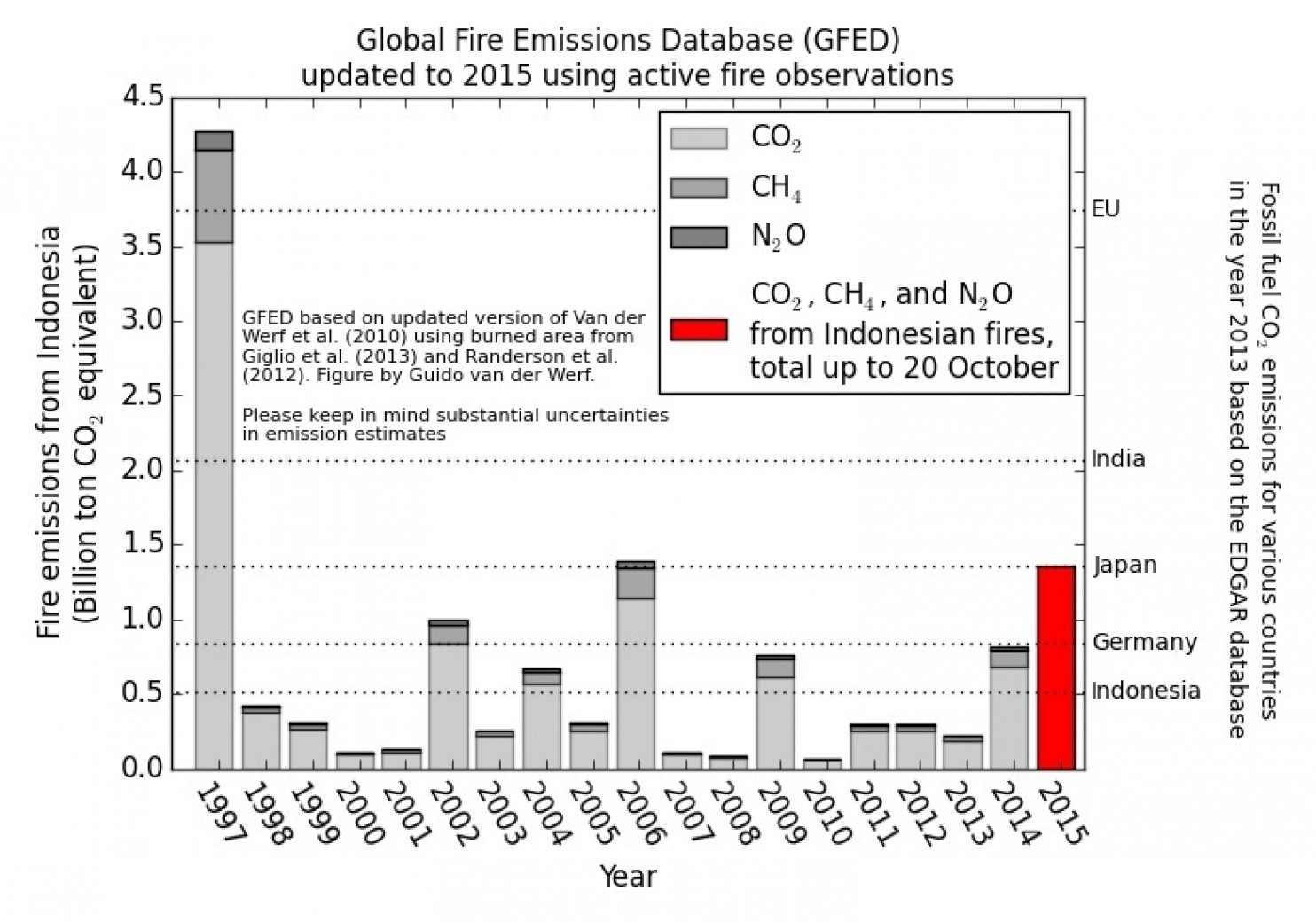 Based on van der Werf’s methodology — which estimates fire emissions to the atmosphere based on satellite imagery of the fires and of vegetation — Indonesian fires have now emitted roughly 1.35 gigatons of carbon dioxide equivalents. A gigaton is a billion metric tons, and the planet is estimated have less than 1,000 gigatons of carbon dioxide left to emit to have a two-thirds chance of keeping global warming below 2 degrees Celsius above pre-industrial levels.

You can also see that this year’s fires are about to surpass the estimated emissions from fires in 2006, which would make them the second worst in this record. Reaching the catastrophic levels of 1997 (which like 2006 was also another El Nino) is still a ways away — it saw more than 4 gigatons of emissions, based on van der Werf’s calculations. The fire emissions from Indonesia probably won’t reach those levels this year, but it seems more than possible that Indonesian fire emissions this year could exceed India’s fossil fuel emissions.

“It is mostly that in 2006, daily emissions were leveling off big time right now which is not the case this year,” says van der Werf.

Indonesia’s fire emissions have, needless to say, long since blown away Indonesia’s own emissions from fossil fuels.

Four researchers from the World Resources Institute presented the data recently in another way — showing that on more than 20 days this year, fire emissions from Indonesia were greater than fossil fuel emissions from the entire, gigantic U.S. economy.

However you slice it, Indonesia’s fire emissions are a particularly noteworthy problem leading into this year’s high stakes climate meeting in Paris. There, world leaders will focus on the planet’s emissions from burning fossil fuels. But the Indonesia story shows why carbon emissions related to land use changes, brought on by deforestation and the many other ways that humans alter their environments, remain an urgent part of the story.