One of the strongest hurricanes ever recorded is fueled by El Niño, scientists say 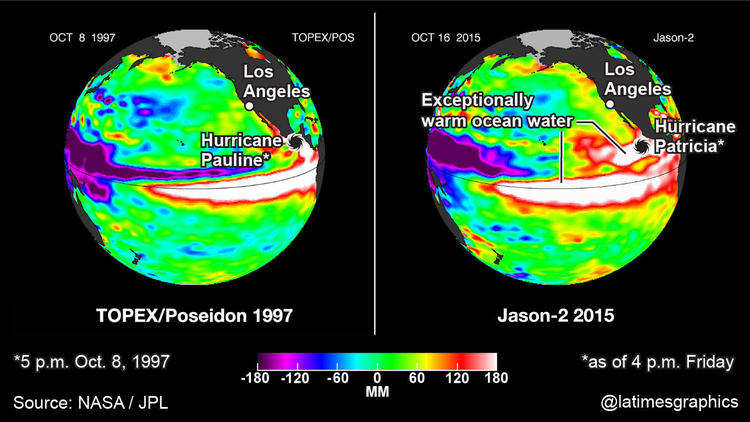 Hurricane Patricia, one of the most powerful hurricanes on record, formed in exceptionally warm waters in the eastern Pacific Ocean, with the hottest areas shown in white. The white areas show the highest sea levels, which are an indication of warmer-than-normal sea temperatures. Patricia formed during a strengthening El Nino, just like Hurricane Pauline did in October 1997. (NASA Jet Propulsion Laboratory/Lou Spirito, Los Angeles Times)

Hurricane Patricia, one of the strongest hurricanes ever recorded, is being fueled by El Niño, a weather phenomenon that continues to gain strength in the Pacific Ocean, scientists say.

Scientists say the powerful hurricane offers a stark preview of a turbulent weather season to come for Mexico, California and the southern United States. Climate experts say this El Niño could be among the three strongest on record.

“A hurricane feeds off warm water, and of course now El Niño has piled up a tremendous volume of warm water in the eastern Pacific, which has fed these hurricanes,” Patzert said.

Hurricane Patricia’s arrival bears an eerie resemblance to another hurricane that swept into Mexico’s west coast in October of 1997 — the year that gave the world the strongest El Niño ever recorded. Hurricane Pauline killed an estimated 230 people in Guerrero and Oaxaca states of southern Mexico as it made landfall in the city of Acapulco.

That hurricane 18 years ago dumped up to 16 inches of rain along the south coast of Mexico. Worst hit were the hillside outskirts of Acapulco, where many parts of the city were cut off by landslides and flooding, and rivers of mud and rocks swept into neighborhoods. Trees were pulled from their roots and boulders the size of washing machines rolled onto roads.

Witnesses said the mudflows looked like lava, making it difficult for some people to escape the swirling rivers of water and mud. More than 40,000 homes were damaged or destroyed. 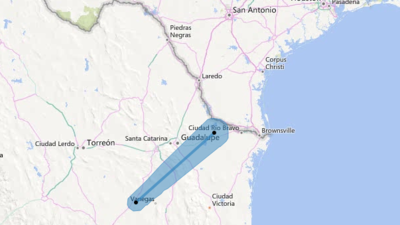 Daniel Swain, a climate scientist at Stanford University, said the waters fueling Hurricane Patricia this week are extraordinarily warm — about 87 degrees Fahrenheit, which is about three or four degrees above the average for that area at this time of year.

“The temperatures in that region are either the warmest they’ve ever been observed in that region, or very close to it. It’s as warm as it’s ever been in that part of the ocean,” Swain said.

“So if you have warmer warm tropical ocean, the potential intensity of hurricanes increases.”

In fact, “the ocean temperatures in that region are considerably above where they were on the strongest El Niño on record previously. There is actually more energy in that region this year,” Swain said.

Swain said he thinks that part of the ocean’s rise in temperature is partly because of El Niño, but part of it might be because of climate change.

In any event, the warm temperatures have led to the strongest hurricane in the record of modern instrumentation in both the Eastern Pacific and the Western Hemisphere.

Patricia was strengthening so fast so quickly, “it’s been breaking every record that’s been set. And it was getting close to the strongest hurricane ever,” Swain said.

Of Hurricane Patricia, Patzert says: “This is a monster. Its track takes it over some of the poorest and least-equipped villages and communities in western and central Mexico. It’s hard to exaggerate this one.”

Of California, Patzert said the state’s expected dousing should begin in earnest by January, courtesy of what could be a train of storms — thankfully, none of them directly caused by hurricanes. (Similarly, the powerful storms that slammed into Los Angeles County after the buildup of the 1997 El Niño arrived in early 1998.)

But because the end of the hurricane season won’t come until the end of November, Southern California could receive the remnant rains from hurricanes that ram into Mexico.