By admin on January 22, 2019 • ( Leave a comment )
Infographic
from UN Office for the Coordination of Humanitarian Affairs
Published on 22 Jan 2019

Approximately 10.8 million people were facing severe food insecurity in Southern Africa as 2018 came to an end. In Eswatini, the estimated number of people facing Crisis (IPC phase 3) or worse food insecurity more than doubled from 120,000 in October to nearly 250,000 in December. In Zimbabwe, where 2.4 million people in rural areas were severely food insecure, the deteriorating economic situation caused sharp price increases and hampered access to food and agricultural inputs. Shortages of basic food commodities in formal markets, including cooking oil, sugar and bread, were reported, especially in remote areas. In Mozambique, more than 1.78 million people were in IPC phase 3 or above across the country, of whom 814,000 people in five provinces were prioritized for urgent humanitarian assistance. Further attacks by non-state armed actors were reported in Cabo Delgado province in November, increasing food security and malnutrition concerns. Meanwhile, in Madagascar, a Flash Appeal was launched to galvanize funding for rapid response in the Grand Sud region, where 890,000 people are severely food insecure.

Drought affected many countries in the region in November and December 2018, compromising food production, while localised floods hit Malawi. In Angola, Botswana, Eswatini, Lesotho, Malawi, Mozambique, Namibia, South Africa and Zambia, poor rains hampered the planting of crops and threatened to undermine the upcoming harvest. South Africa – the region’s largest maize producer – reported significantly below-average rainfall, while Eswatini and Lesotho reported reduced staple crop outputs due to dry conditions. There remains an 82 per cent probability of an El Niño phenomenon occurring from January to March, which could compound the situation. In the meantime, while most parts of Malawi registered below average rainfall, heavy rains hit four districts in December 2018 – Balaka, Phalombe, Mangochi and Mulanje – causing riverine and flash floods. Over 11,000 people were affected and around 1,400 were temporarily displaced.

An escalating measles outbreak affected over 18,000 people in Madagascar, with more than 12,000 cases registered in December alone. At least 65 of the country’s 114 districts were affected, with low immunisation coverage contributing to the fast spread of the disease. Separately, the number of suspected plague cases in Madagascar rose from 103 at the end of October to nearly 150 at the end of December. Meanwhile, Zimbabwe managed to control the main cholera outbreak in Harare. However, a new outbreak was declared on 24 November in Mount Darwin District, with around 230 cases registered by the end of December. In Tanzania, around 380 new cholera cases were reported in November and December, most of them from a new outbreak in Momba district. In Angola, 312 cholera cases, including three deaths, were reported from the onset of the latest wave of the cholera outbreak in September 2018 to the end of December. 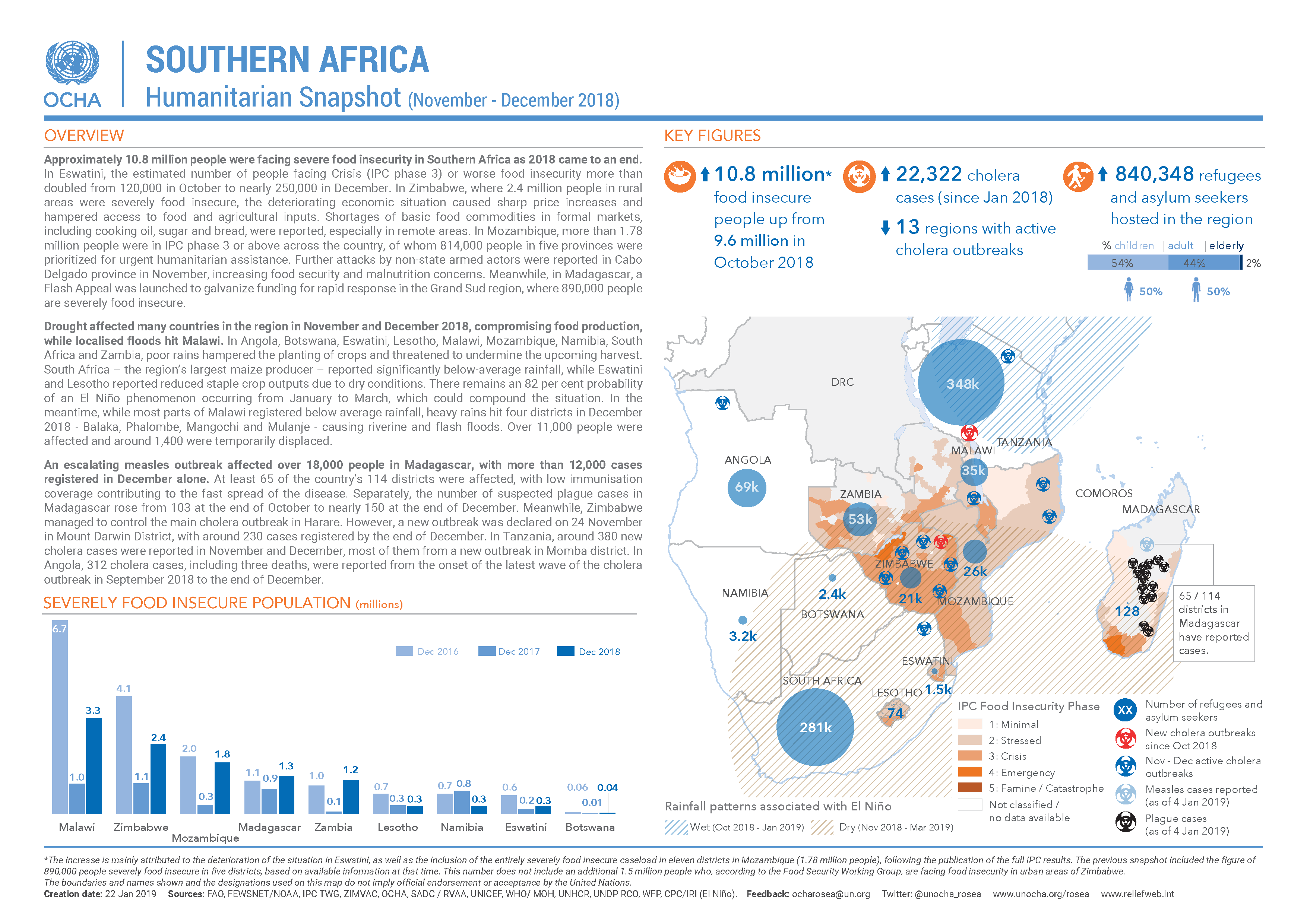