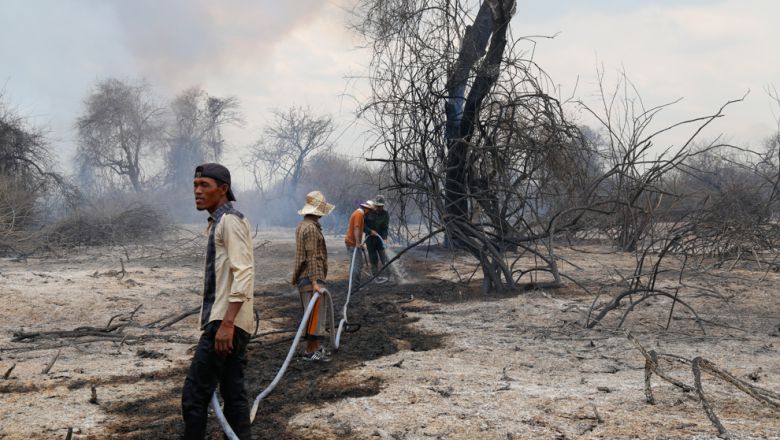 Last year’s drought caused a nationwide crisis, with harvests ruined, forest fires raging and many rural families struggling to feed themselves. As experts take stock of the impact, news of another potential El Niño raises a question: Is Cambodia prepared for the next drought?

For Cambodia, the El Niño that began in 2015 hit hard, causing a two-year drought that jeopardised the health, food security and finances of millions of people.

According to the National Committee for Disaster Management (NCDM), some 2.5 million people across 18 provinces were severely impacted by May of last year, and the province among the hardest hit was Banteay Meanchey, in the northwest of the country.

But while a wet rainy season that arrived in June alleviated the situation nationally, conditions in parts of the province suggest that this year’s rainy season may not have been enough to get them through the year. Already, in O’Chhrou district’s O’Beichoan commune, six villages have experienced water shortages, beginning last week.

“There are about 2,000 families now buying water, and the water prices are starting to increase,”

“Currently they have no water to use for cooking, washing clothes, or bathing,” he said, adding that farmers in the commune will forgo planting crops for the third year straight. “We don’t care about the crops yet. We think only to support the people and the livestock.”

Meurng says provincial authorities have promised his commune a 5,000-liter truck to deliver water, but so far he hasn’t “seen it yet”. “Our commune is the worst hit one among the district,” he said.

What Meurng is grappling with at the moment could be a sign of what’s to come for much of the country. Although spurred by El Niño, last year’s drought may have been a sign of dry conditions to come – possibly sooner than expected. A view of the flooded forests near Kampong Phluk in Siem Reap province. Alessandro Marazzi Sassoon

Last week, the US National Oceanic and Atmospheric Administration declared the ongoing La Niña over and predicted a 50 percent chance of another El Niño developing by the end of 2017.

Caused by warming waters in the Pacific, the event causes periodic changes to the world climate, including – typically – drought in Southeast Asia. In 2015 and 2016, one of the strongest such events recorded precipitated the worst drought in Cambodia since 1979.

El Niño usually occurs at two to seven-year intervals and is usually followed by a La Niña, a reciprocal change brought on by a cooling of the waters in the Pacific. This year’s was remarkably short, although it did bring added rainfall to the region.

For the United Nations World Food Program, which was a chief coordinator of the humanitarian responseto the drought, the medium to long-term effects of last year’s El Niño are still being assessed, but the first of a three-part national survey of 2,400 households published late last year gives a sense of the scope of the disaster. For Jonathan Rivers, a mapping and vulnerability officer at the WFP, another El Niño coming so soon “would be potentially quite problematic.” Ministry of Water Resources and Meteorology spokesman Chan Yutha, meanwhile, dismissed the possibility of such an event, predicting that the rainy season would actually start in the first week of May this year.

“In short, we will not be affected by El Niño,” he said.

Facing change
Back in Banteay Meanchey, tangible steps are being taken to prepare. Deputy provincial governor Oum Reatrey says that the authorities expect to see drought-like conditions in certain communes, including O’Chhrou, and are responding.

“Now we are working with the Ministry of Water Resources and Meteorology; we are damming the Serey Sophorn River to create a reservoir, and we are also dredging canals for the people to use and educating people to use the water in a careful manner,” he said. Reatrey says that they will be ready for the next El Niño.

“We are not very worried at the moment, because we already took some action,” he said.

But that may be a rose-tinted view of the future. For Nop Polin, a program officer for humanitarian NGO Dan Church Aid Cambodia who represented Cambodian civil society at the UN Climate Summit in Paris (COP21), the extreme drought events brought by the last El Niño, followed by flooding brought on by La Niña, may be a preview of what lies ahead as climate change progresses.

“This is the new normal, because this is something that is not irregular anymore,” he said. For him, institutional reform should be a top priority. “The preparation is on an ad-hoc basis. It is not systematic,” he said, noting that while “some provinces have emergency preparedness and response plans, it’s very hard to say if it’s well prepared [nationally].”

Polin said that national coordination has improved but that capacity and preparation remain lacking. For Polin, work is needed to better forecast climatic events, both for disaster preparation and for farmers to better plan their harvest. NCDM spokesman Keo Vy assured Post Weekend that the next emergency response would be smoother and more comprehensive both in terms of maintaining water resources and planning.

“Now we know what and where our sources of water for intervention and conservation are,” he said.

Last year, the NCDM, alongside civil society groups, the UN and the Cambodian Red Cross (CRC), conducted a month-long national water delivery emergency operation that started in mid-April. It saw the delivery of five million litres of water per day to the most affected communities.

The NCDM committed $125,000 to the operation.The CRC managed to raise $13 million in one day for drought relief and Prime Minister Hun Sen mobilized the private sector to donate.

But for Polin, this mobilization of resources “from tycoons and parliamentarians” is not enough, adding that the NCDM budget ought to be increased. According to Council of Ministers spokesman Phay Siphan, the NCDM must request funding directly from the prime minister and the council in case of disaster.

Napoleon Navarro, a senior policy adviser for the UNDP, noted by email that the El Niño revealed the need for an improvement to the Kingdom’s early warning systems and response capacity.

“It is not sufficient to know that an El Niño event is coming – it is also important to translate information into short-term public actions … or more long-term ones,” Navarro wrote. For the short term, he mentioned pre-positioning water trucks and ensuring that water ponds are full as examples, while “eco-restoration” of watersheds could be a long-term measure.

“Part of the problem is that institutionally, disaster response (which is more visible) normally takes precedence over disaster preparedness and risk reduction (which is less visible),” he wrote. Nonetheless, Navarro notes that the government has made positive progress by pushing for preparation to take place at a local level.

“One thing that the government is doing right is encouraging communities to undertake vulnerability risk assessments and to utilise the annual commune and sangkat funds to prepare for the consequences of climate change,” he said. According to the water resource ministry’s Yutha, the government is “encouraging [communities] to build more reservoirs, canals and ponds, such that [in events] when farming cannot be sustained, there is water for daily use.” He said that the ministry has helped to build or is in the process of building nine reservoirs to prevent water from flowing directly into the lake during the rainy season.

Lor Reaksmey, spokesman for the Ministry of Agriculture, echoed Yutha’s statements, noting that his ministry had issued directives to reduce rice paddy cultivation. “We are very ready for 2017,” he said, though he conceded that areas like Banteay Meanchey may face difficulties.

The recent El Niño also brought about a new threat to the environment: the last fire season set a record. Alarmingly, the heat, dry conditions and low water levels allowed for an estimated one-third of the seasonally flooded forests around the Tonle Sap lake to burn. These forests are breeding grounds for fish, and the impact of the fires on the fisheries has yet to be assessed.

Simon Mahood, a senior technical adviser for the Wildlife Conservation Society – which works with the Ministry of Environment in training rangers – says that investment is needed to prevent a repeat of such a disaster.

“We’re in the process of doing some satellite analysis to understand the extent of the destruction, and the patterns of the spread of the fires, so that we can be better prepared next time, because it is clear that there will be a next time,” he said.

“Ideally, you would have a well-trained ranger force with pumps and hoses, coupled with a system of fire lookout posts so that fires could be identified, reported and extinguished quickly,” he said. Hitting home
The impacts of the drought extended beyond water, agriculture and the environment to the household level, where livelihoods were hit hard.

“Nationally, 13 percent of households reported taking on additional loans as a result of El Niño,” with loans averaging $1,282 per household, according to the WFP survey.

For the UNDP’s Navarro, this is another concern should 2017 see another El Niño. “In a country where a significant percentage of the population have incomes just about [at] the poverty line, another event so soon could see an increase in rural poverty levels,” he said.

Dr. Mey Kalyan, a senior adviser to the Supreme National Economic Council who has appeared on Cambodian television to raise awareness about climate change, said that ultimately, Cambodia’s combined vulnerability to climate change and limited response capacity means that a degree of impact is unavoidable.

“Impact will be a big, big negative on the economy and on society as well – on the poor farmers,” he said. According to Kalyan, the threat requires the government to take a more pro-active approach to preparing for the future, even if it doesn’t yet know the full degree of climate change’s impact.

“We have to assume, differently from the government of Donald Trump, that climate change is coming,” he said. “Up until now it’s been half-hearted … We’ve not been serious about this.” Part of the problem, he said, is that solutions are coming from the donors and not from the government.

But the UNDP’s Navarro noted progress over the past decade, noting that 14 ministries have climate change action plans and that preparedness, as measured by the Notre Dame Global Adaptation Index, shows an improvement from being the 163rd most prepared country in 1995 to being the 130th in 2015.

For Kalyan, the limitations on what can be done compared with the pressures climate change will bring are daunting. “I am sure the situation will get worse and worse, not better.”