Why Experts Just Changed Their Forecasts About 2018 Hurricane Season Activity

In early spring, several forecast groups or organizations issue forecasts about activity in forthcoming Atlantic hurricane season. This year many of them hinted at a “slightly above” to “above” average season. June 1st is the official start of the Atlantic hurricane season though Subtropical storm Alberto gave us a May preview. Some of the early season forecasters have adjusted their forecasts to expectations for a “normal” season. What is the science behind why the experts changed their minds about the 2018 season? The answer may lie with the graphic below, but I will explain later.

Before looking back at April projections, it is instructive to define what “average” means in the context of hurricanes in the Atlantic basin. The table below is provided by the National Oceanic and Atmospheric Administration (NOAA) Hurricane Research Division (HRD). NOAA notes that “the following records for the period of reliable data hold for the entire Atlantic basin (from 1966-2017) and for the USA coastline (1900-2017).” Looking back at the April forecasts, organizations had different numbers, but most suggested “above average” activity. The group that essentially pioneered seasonal prediction of hurricanes is at Colorado State University. Legendary tropical meteorologist Dr. William Gray pioneered these techniques many decades ago, and now its Tropical Meteorology Project group is led by Dr. Phil Klotzbach. In April, this group issued the following forecast and rationale on its website,

We anticipate that the 2018 Atlantic basin hurricane season will have slightly above- average activity. The current weak La Niña event appears likely to transition to neutral ENSO over the next several months, but at this point, we do not anticipate a significant El Niño event this summer/fall. The western tropical Atlantic is anomalously warm right now, while portions of the eastern tropical Atlantic and far North Atlantic are anomalously cool. Consequently, our Atlantic Multi-decadal Oscillation index is near its long-term average. We anticipate a slightly above-average probability for major hurricanes making landfall along the continental United States coastline and in the Caribbean.

The Colorado State University group was not alone. NOAA’s Climate Prediction Center issued expectations for a 45% chance of an above normal season. They specifically called for a 70% chance of 11 to 17 named storms with 5 to 9 becoming hurricanes, including 2 to 4 that would exceed Category 3 (major).  The Weather Company, a unit of IBM, called for 12 named storms, 5 hurricanes, and 2 major storms. One major group called for a “below normal” season back in April.  University College of London’s Tropical Storm Risk group issued prediction for 15% lower than normal activity and 25% below the average of the past decade.

In late May to early June, many of these groups adjusted their predictions downward. To be fair, it is common practice for such groups to issue updated seasonal forecasts. The Colorado State group issues forecasts and updates on April 5th, May 31st, July 2nd, and August 2nd. As former FEMA director Craig Fugate has often stated, “these are forecasts not guarantees” so they will carry some uncertainty. So what changed? Here is what the Colorado State group wrote on its website on May 31st,

We have decreased our forecast and now believe that 2018 will have approximately average activity. While we still do not anticipate a significant El Niño during the 2018 Atlantic hurricane season, most of the North Atlantic has continued to anomalously cool over the past two months. The eastern and central tropical Atlantic is cooler than normal at present. We anticipate a near-average probability for major hurricanes making landfall along the United States coastline and in the Caribbean.

Two things catch my eye: El Nino and “central tropical Atlantic is cooler.” As you see in the first graphic above, the central tropical Atlantic Ocean is somewhat cool. In the anomaly map, blue indicates temperatures “cooler” than normal.  Tropical cyclones typically require very warm waters (79 deg F/26 deg C or higher), which explains why the season typically peaks in September. The heat properties of water cause it to warm more slowly compared to air temperature. It is interesting to note how relatively warm the middle latitude Atlantic Ocean is right now. I should also mention that from June to early July, hurricanes are more likely to form in the Gulf of Mexico or western Caribbean. Later in the season, activity tends to shift to the tropical Atlantic region so it will be interesting to see how conditions change.NOAA also issued an update in late May and reduced its numbers slightly though still calling for a “normal to slightly above normal” season.NOAA forecasters adjusted slightly downward to a 35% chance of an above-normal season, a 40% percent chance of a near-normal season, and a 25% chance of a below-normal season. The NOAA press release talks about the same factors as the CSU group, but there is a slightly different interpretation,

The possibility of a weak El Nino developing, along with near-average sea surface temperatures across the tropical Atlantic Ocean and Caribbean Sea, are two of the factors driving this outlook. These factors are set upon a backdrop of atmospheric and oceanic conditions that are conducive to hurricane development and have been producing stronger Atlantic hurricane seasons since 1995.

NOAA’s lead seasonal forecaster Gerry Bell sums up the uncertainty with reporters, “There are no strong climate signals saying it’s going to be extremely active, like last year, or extremely weak.” Seasonal forecasting of hurricane activity can be tricky because so many ingredients go into the soup.  The presence of El Nino (or not) affects global upper-level wind patterns that steer storms or cause wind shear (bad for hurricane development). Other factors include rainfall activity in western Africa, the Madden-Julian Oscillation (a tropical system that propagates around the globe causing thunderstorm activity), ocean temperatures, and more.

So how good are these seasonal forecasts anyhow? Dr. Phil Klotzbach published a paper in the American Geophysical Union journal Geophysical Research Letters assessing 25 years of seasonal hurricane forecasts. His main conclusion is that skill has been increasing over the years. The paper suggests room for more improvements as physical understanding of the systems increases and models are further refined.

I will end with this. Irrespective of how many storms are predicted, it only takes one storm to cause a human tragedy. 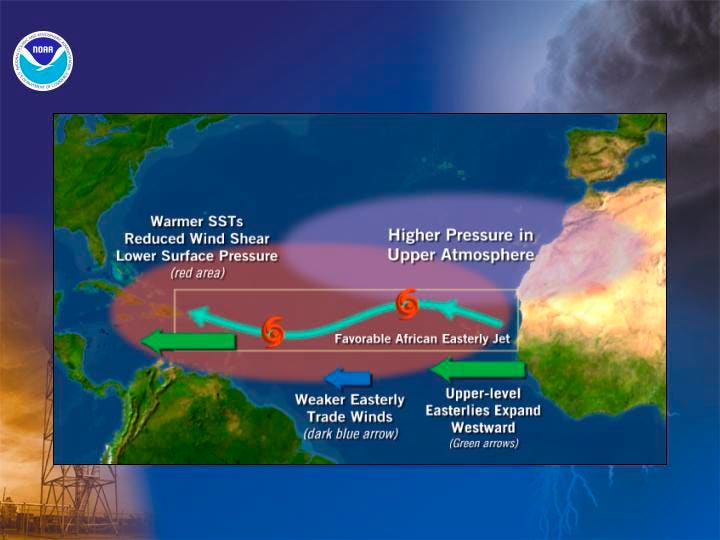 Good conditions for hurricane development in the Atlantic.