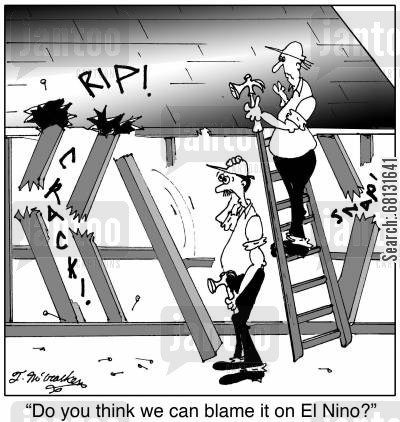 El Nino did it.

What, you ask? Well, it depends on whom you talk to, because right now everything from the price of natural gas to the temperature in Central Park is being blamed on the Pacific Ocean phenomenon.

The thing is, it doesn’t really start affecting U.S. weather for another few weeks or even months.

The official pronouncement from the Climate Prediction Center, the arbiter of El Nino activity in the U.S., puts it this way: “Across the contiguous United States, temperature and precipitation impacts associated with El Nino are expected to remain minimal during the early Northern Hemisphere fall and increase into the late fall and winter.”

Or, stop making El Nino the scapegoat when something’s awry. The agency in College Park, Maryland, has been issuing this message in its advisories for months.

Before we go any further, let’s review what El Nino is. The surface of the equatorial Pacific Ocean warms, causing the atmosphere above the waves to react, setting off a global chain-reaction among weather patterns worldwide.

El Ninos happen every few years; the biggest one on record was in 1997-98. The current one, which should peak pretty soon, is the strongest since, and some forecasters speculate the old mark could be surpassed.

The climate center tried in a blog post last June to head off some of the rush to pin blame on El Nino for everything that goes wrong.

“It rained on your wedding day? El Nino. Had an outdoor picnic ruined by a late afternoon thunderstorm? El Nino,” wrote Tom De Liberto, a contractor for the center.

Was the summer hot? El Nino.

His post was accompanied by a map that showed where El Nino effects usually occur from June to August: Heavy rains across the Pacific, heat waves in South America, warm and dry air in the Caribbean. Nothing happens in the U.S. or Canada.

“Yeah, it’s hard to attribute any particular weather event to El Nino, since we don’t have a parallel Earth upon which we could test the hypothesis,” said Todd Crawford, principal scientist at WSI in Andover, Massachusetts. “It’s sort of like climate change in that regard, in that we don’t really know whether specific weather events are driven by changes to the larger background state.”

El Ninos create wind shear across the Atlantic that rips apart tropical systems. While there have been nine named storms and hurricanes in the ocean in 2015, none caused major problems to the U.S. Tropical Depression Ida is currently spinning in circles in the mid-Atlantic.

Both Rogers and Crawford said El Nino may have had something to do with the heavy rains that have fallen recently on Southern California and other parts of the West. Los Angeles got more rain in a day last week than it usually gets in the entire month of September.

Drenching Southern California is something that El Ninos are known to do in the winter months. In fact, the phenomenon typically pushes storm tracks south across the U.S. throughout the winter. While that means milder winters for parts of the northern U.S., during the last El Nino, in 2010, Dallas got record snow.

“The main correlation is the winter one,” Rogers said. On Tuesday, traders worried that El Nino would cause a mild winter sent natural gas for January delivery to a record low for the 2016 contract.

So, if folks in New York, Boston and Chicago have to open their windows in December to cool down, that won’t be such a good thing for the natural gas market.

We won’t complain. You can blame it on El Nino.