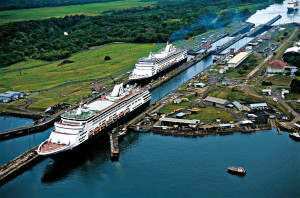 PANAMA CITY, Aug. 28 (Xinhua) — The Panama Canal Authority (ACP) announced Friday it had canceled plans to restrict the passage of ships above a certain size through the canal.

In early August, the authority announced that restriction would start on Sept. 8 due to El Nino-related drought plaguing the country.

The ACP indicated that the water level of Lake Gatun remains below seasonal average and that El Nino continues to affect the region. However, the amount of rain falling on the canal in recent days, coupled with water-saving measures and efforts to deepen the canal, have relieved the pressure.

This means ships with a draft of up to 12.04 meters, the canal’s current maximum capacity, can sail through unimpeded. The now-cancelled restrictions would have limited ships by a few centimeters, restricting passage to those with a draft of 11.89 meters. Yet, this small reduction would have excluded 18.5 percent of ships going through the waterway.

Despite this relaxation, the ACP warned that it would continue to carefully monitor water levels of the lakes of Gatun and Alhajuela, which are essential to guarantee the operation of waterway, whose 10-year expansion project is in its final phase.

Should rainfall stop and drought return, the measures will likely be re-applied, said the ACP.