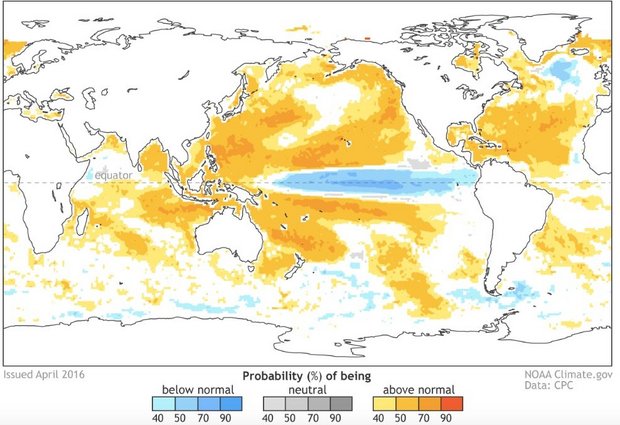 El Nino appears to be on the way out, but another climate phenomenon may be waiting to take its place.

A group of researchers including the National Weather Service issued a La Nina watch this week in its monthly report updating El Nino’s status.

A watch is issued when conditions are favorable for the development of La Nina in the next six months, according to NOAA’s Climate Prediction Center.

The latest report was issued this week by the Climate Prediction Center, the National Centers for Environmental Prediction, National Weather Service and the International Research Institute for Climate and Society. It said that El Nino was continuing but weakening.

El Nino is expected to fade away soon — by late spring or early summer, according to the report.

And then comes La Nina? It’s possible. The report said that the chances of La Nina appearing during the second half of the year were on the increase.

But first to El Nino.

El Nino is the term used to describe the above average-warming of the equatorial Pacific. Those warmer waters can and have translated into climate pattern shifts worldwide.

This El Nino has been a strong one, according to researchers. However signs point to it weakening.

Sea surface temperature anomalies were still above average in the key monitoring regions, the researchers said, but have weakened in the past month.

Another sign of El Nino is fading: Upper level and low-level wind anomalies are also lessening, according to the report.

Other signs of weakening were found in the Souther Oscillation Index which is used to measure the atmosphere’s response to El Nino, and rainfall patterns over the tropical Pacific, Indonesia and the Philippines. 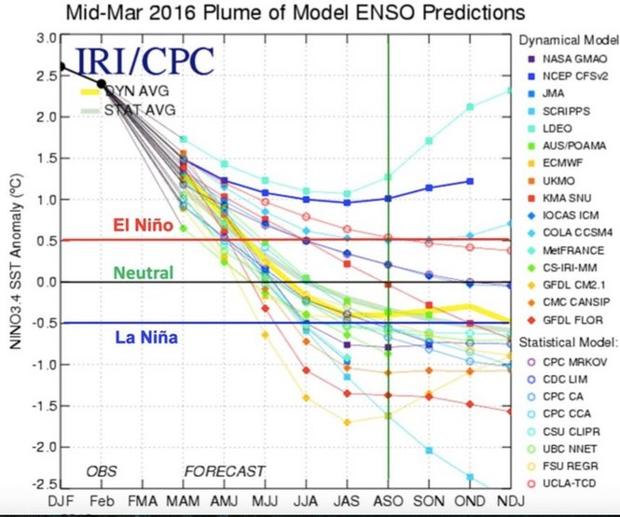 Most computer forecast models suggest El Nino will continue to weaken and fade out entirely by late spring or early summer, setting the stage for a possible La Nina episode later this summer and early fall.

The report said that assumption is based on model forecasts, plus historical trends: La Nina has shown a pattern of following strong El Nino events.

But what is La Nina?

La Nina is in some ways the opposite of El Nino. Where El Nino is characterized by the above-average warming of the equatorial Pacific, La Nina is signaled by colder-than-average seas in the same areas, according to the CPC.

Sea surface temperatures will have to fall below average by 0.5 degrees Celsius in the key Nino monitoring regions for a month to qualify as a La Nina event.

It’s been a while since the last La Nina. The last cold period began in the summer of 2010 and lasted through early winter 2012 but was a weak one.

What does La Nina mean for the weather across the U.S.? 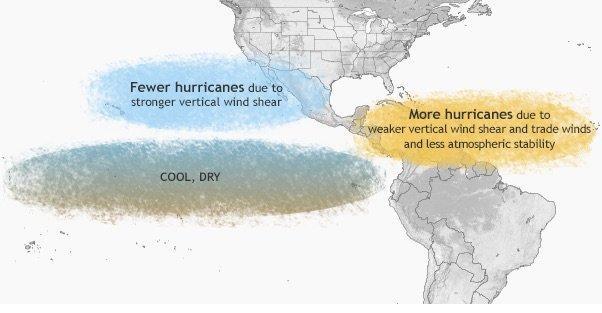 La Nina events can help increase the number of tropical storms in the Atlantic, which has been on the quiet side for the past three seasons. (Climate.gov)

One of the biggest effects could come during hurricane season, which begins June 1 but typically begins to get more active in August.

La Nina is often associated with an increase in activity in the tropical Atlantic. Where El Nino typically enhances wind shear over the Atlantic, which inhibits tropical storm development, La Nina does the opposite and reduces shear.

Hurricane researchers were watching those trends. An early forecast from Colorado State University issued this week predicts near-average activity in the Atlantic after three years of below-average seasons.

The next monthly El Nino update is scheduled for May 12.