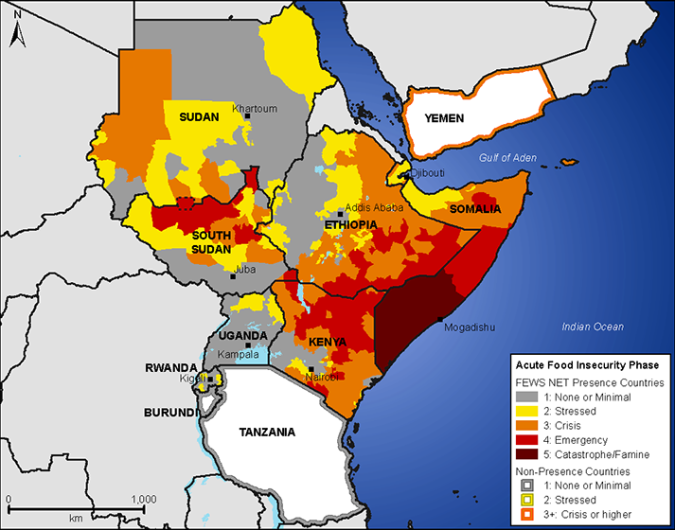 Ethiopia is suffering its worst drought in more than a decade, a condition exacerbated by El Niño, the water-warming phenomenon in the Pacific Ocean that has affected weather patterns and reduced rainfall levels across a large chunk of Africa, hitting Ethiopia particularly hard.

More than 80 percent of Ethiopians depend on agriculture to make a living, but this year their crops have withered. The government says that 8.2 million people are in need of immediate food assistance and that, by next year, 15 million may face starvation if they don’t get help. The crisis in Ethiopia could be a harbinger of more weather-related disasters if climate change makes El Niño more frequent.

Ethiopia has made a lot of progress since a combination of civil war and drought caused the great famine of 1983-85 that cost at least 400,000 lives. Since coming to power in 1991, Ethiopia’s government has worked to raise economic growth, improve infrastructure and create a work-for-food program that feeds the hungry between January and June each year. Since July, Ethiopia’s government has released $192 million for emergency food aid and other assistance.

That is not nearly enough: Ethiopia’s government says it needs an additional $596 million in international assistance to cope with the current emergency. But the wars in Syria and Iraq have shifted scant humanitarian aid resources to the Middle East.

John Aylieff, a top official with the United Nations World Food Program, has asked for a “collective effort of the entire international community” to help Ethiopia get through the end of El Niño. The World Food Program itself is being forced to cut vital food aid in the face of rising demand from multiplying humanitarian crises. International donors need to allocate additional emergency funds for Ethiopia, and they must step up with more support for the World Food Program so it can get more food to those in dire need.