Hurricane Patricia is the most powerful hurricane ever recorded in the Western Hemisphere. Tens of thousands of people were being evacuated as it bears down on Mexico’s Pacific Coast. Hurricane Patricia’s rampage into Mexico was part of the Pacific Ocean’s hyperactive hurricane season of 2015, one that’s been supercharged by weather troublemaker El Niño.

So far this season, eight hurricanes of Category 4 or 5 strength (at least 130 mph) have formed in the eastern Pacific Ocean, which is an all-time record, according to hurricane researcher Phil Klotzbach of Colorado State University.

In the central Pacific, a record 14 named tropical storms or hurricanes have spun through the region this season. Fortunately, as is the case with most Pacific hurricanes, few have hit land. 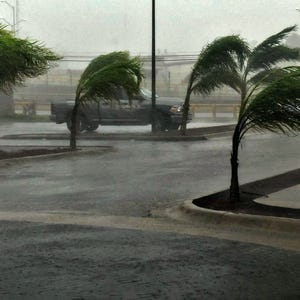 El Niño, a natural warming of tropical Pacific Ocean waters, has provided fuel for the storms, which usually need warm water of at least 80 degrees to form. Ocean temperatures near Hawaii are at record highs, Klotzbach said. El Niño also reduces the winds that tend to tear hurricanes and typhoons apart.

Other than Hurricane Joaquin, the Atlantic hurricane season has been mostly a dud, as predicted and as is typical during El Niño. Only three hurricanes have formed, according to the National Hurricane Center.

As for global warming, would warmer oceans would mean that stronger, more frequent hurricanes like Patricia are possible? The jury is still out on that one:

“It is premature to conclude that human activities — and particularly the greenhouse gas emissions that cause global warming — have already had a detectable impact on Atlantic hurricane or global tropical cyclone activity,” according to NOAA’s Geophysical Fluid Dynamics Laboratory. (Tropical cyclones are all tropical storms, hurricanes and typhoons.) 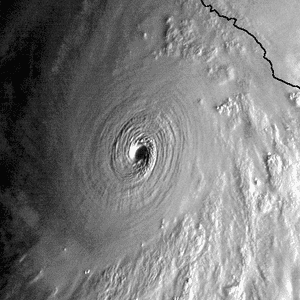 Patricia tops list of world’s strongest storms, however, looking ahead, the laboratory said that “warming by the end of the 21st century will likely cause tropical cyclones globally to be more intense on average.”

Scientists are always clear to point out that no one storm can be blamed on or caused by man-made climate change. Patricia, like all weather events, was due to many causes, such as El Niño.