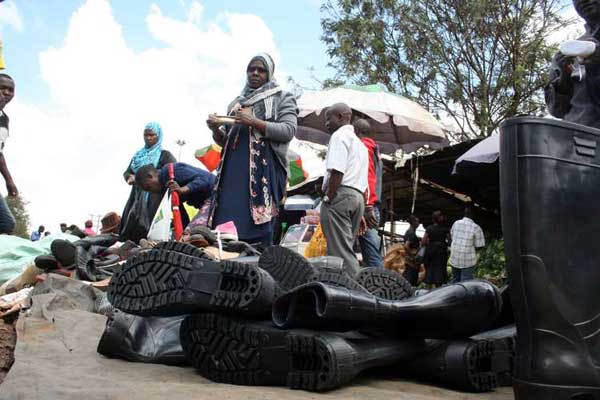 Traders sell gumboots at Nairobi’s Kangemi market ahead of the anticipated heavy rains. Experts have said the rains that have started falling could be an indication of the onset of El Niño rains. PHOTO | ROBERT NGUGI | NATION MEDIA GROUP

By MUCHEMI WACHIRA
More by this Author

Light showers came down over the weekend in Nairobi and its environs, with weather experts saying they were an indication that El Niño rains had started.

“It is likely that El Niño has now begun,” Mr Samuel Mwangi, the deputy director of the Kenya Meteorological Department, told Nation but promised to give a more comprehensive report Monday.

Similar rains have been experienced in other parts of the country in the last few weeks.

In Nairobi, Nyeri, Kirinyaga, Murang’a and Kiambu the rains had started on Saturday in some areas but intensified at night, falling until the early morning hours.

The downpour found most Nairobi residents in flood-prone areas unprepared.

In the Imara Daima area of Embakasi, a contractor has excavated a road he is constructing, leaving open trenches.

On Saturday, raw sewage that has been leaking from nearby manholes started draining into the trenches and by Sunday residents of Villafrank and Mastermind estates, where the road cuts through, could not access their houses.

“The trenches are flooded with raw sewage and now that the rains have started we have been left helpless as no vehicle can drive along the road.

“We cannot even access our houses,” said Mr Patrick Mulili, a resident.

Earlier, the residents had written to the Nairobi County government asking it to compel the contractor to fill-up the trenches as the area is prone to flooding.

Mr Mulili said the regional government told them that if a disaster occured due to the excavation of the road, the contractor would be to blame.

The same road is the only outlet for Embakasi Girls Secondary School and Mukuru Kwa Njenga slums.

Recently, school managers said they were afraid the rains would hamper the delivery of exam papers to the institution.

The Kenya Certificate of Secondary Education exams have already started.

The county government on Friday announced that it would hold public awareness campaigns to advise residents on how to cope with the anticipated heavy rains.

“We are now meeting Nairobi residents in all our 17 sub-counties to conduct public awareness campaigns and use them as platforms to caution them on how to cope with the imminent catastrophe and also take mitigation measures to protect property and human life when the heavy rainfall starts,” the county executive for roads and transport, Mr Mohamed Abdulahi, said during a public forum with Kibra residents.

Kibera has been identified as one of the hotspots prone to floods.

City Hall had earlier announced that it would relocate people living along the Mutu-ini-Ngong River to neighbouring public schools as the river, which passes through the slum, is expected to overflow due to the heavy rains.

However, by Sunday the residents seemed unaware of the relocation plan, which was not mentioned during the meeting.

The county government identified flood hotspots in a preliminary report following flash floods experienced in the city in May and June resulting in deaths and loss of property.