On a bright afternoon in east Ethiopia, Mohammed Jibril’s family is passing around corncobs roasted over a fire. Bulky cows lounge on the other side of a shady tree, munching from a golden carpet of cereal.

It is a picturesque rural scene, complete with a forested mountain towering over the plains. Yet Jibril is worried and, when asked about this year’s crops from his three hectares of land, he is scathing. “What would I harvest?” he asks, gesticulating at his scrappy cornfield. 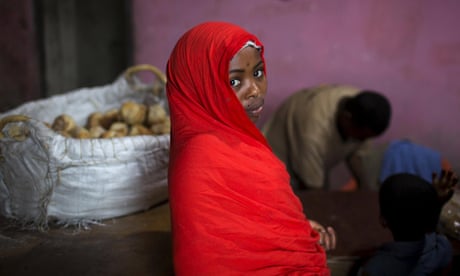 Due to a lack of rain, Jibril, 28, expects to collect only about 400kg of corn. Times were better a decade ago in the Mieso district of West Hararghe Zone, in Ethiopia’s Oromia region; back then, Jibril harvested up to 20 times that amount. Now most of his failed crop is only useful as fodder for his herd.

The story is the same across almost all of eastern Ethiopia, after a succession of supposed rainy seasons largely failed to materialise. The crisis has left 8.2 million of the country’s 96 million people in need of food aid – a number that could almost double in 2016 as the effects of El Niño linger.

Jibril spent $100 (£65) renting a tractor this year; by his side is a Kalashnikov rifle worth more than $1,000. He is not among the poorest in Ethiopia, but he is worried about the immediate future. “If I don’t sell the cows they will run out of food and die before the next harvest,” he said. He has sold three this year, but at a steep discount as farmers all around him also offload livestock before the situation worsens.

As with the last dry spell, in 2011, Ethiopia’s government, with foreign assistance, looks likely to prevent the catastrophes of the past. In 1973, Emperor Haile Selassie’s neglect for the countryside led to the deaths of about 300,000 – and helped topple his regime a year later. A decade later, civil war during a socialist dictatorship led to famine when rains failed. Aid workers think the current development-focused administration, experienced at crisis management after almost 25 years in power, can cope. This month officials said the government has allocated $192m for relief efforts.

But the severity of the crisis raises questions about why Ethiopia still needs emergency aid and food imports given the nation’s agriculture-led economic growth and decades of development assistance from donors.

The government is commended by partners for its pro-poor budgeting, which means directing spending towards water, health, education, agriculture and infrastructure. With agriculture employing almost 80% of the workforce, improving farm productivity is key. The primary focus has been providing advice, seeds and fertiliser to smallholders. Over the past five years the government has also encouraged large-scale farming, which has not yet added significantly to food production. And in 2011, with assistance from donors such as the Bill and Melinda Gates Foundation, the government created the Agricultural Transformation Agency to boost yields and improve value chains.

Those efforts have led to agricultural growth that has averaged 6.6% a year since 2010, according to the finance ministry. What has not happened is the eradication of severe poverty and vulnerability. The UN Development Programme concluded this year that although Ethiopia’s poverty rate dropped from 39% in 2005 to 26% in 2013, the number of people in extreme poverty remained at roughly 25 million due to population growth.

Even if food surpluses were available from fertile areas in the highlands to the west, it is not clear they would reach those in the east. The government created a commodity exchange in 2008, again with donor support, that was supposed to modernise food markets. But seven years later, the bourse is still primarily a trading post for the country’s main exports, such as coffee and sesame. It has yet to change the way staple foods are distributed around the country.

According to the government’s bullish predictions, food surpluses should be available next year, and the economy will keep growing rapidly. During previous El Niño years, the economy shrunk by up to 5%. But the finance ministry says growth of approximately 10% – driven also by infrastructure spending and a construction boom – will not be affected this time because agriculture is now less dependent on rain, and the economy is less dependent on agriculture. The ministry’s data says 39% of gross domestic product now stems from farming, compared with 45% in 2010.

In areas like Mieso, the change is not evident. The ground under even the more arid stretches is believed to hold enough water to irrigate swaths of land, according to local experts, but the investment has not been made to harness it. After the east African food crisis in 2011, the talk was of building up the resilience of communities to drought, but achieving this will be tough, said an NGO head, who did not want to be named. “It’s really, really expensive to make boreholes, it’s really really, expensive to make irrigation. If we had unlimited funds it wouldn’t be a problem, but we don’t.”

Others blame tiny smallholdings and insecure land tenures as one of the key reasons that millions of Ethiopian farmers do not move beyond rain-dependent subsistence. The state owns all land in Ethiopia.

Whatever the underlying reasons, with the crisis running counter to the narrative of an ascendant African powerhouse leaving poverty behind, some aid agency members were concerned at official attempts to downplay the crisis. 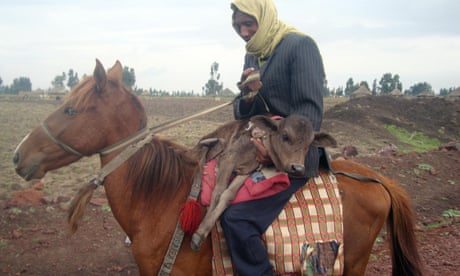 “There is this huge competition for scarce emergency resources around the world, so you really have to push. But without a big push from the government – they’ve been saying two things at the same time, ‘Help us’, and ‘Everything’s fine’ – that mixed messaging sure does not help in getting the resources,” said another charity executive, speaking anonymously. Most foreigners working in Ethiopia for NGOs, embassies, or international organisations do not criticise Ethiopia’s government publicly due to concerns their work will be affected.

Ethiopian officials now seem to have changed their tone, with the prime minister, Hailemariam Desalegn, visiting affected areas and his government making a clear appeal for assistance in unison with the international community. A total of $340m is needed just for the rest of this year.

“The challenge we have before us is incredibly serious, and it will take the collective effort of the entire international community to support the government in preventing the worst effects of El Niño now and well into next year,” said John Aylieff, from the World Food Programme, earlier this month.