Research reveals the connection between climate change, El Niño and the possibility for more extreme wildfires 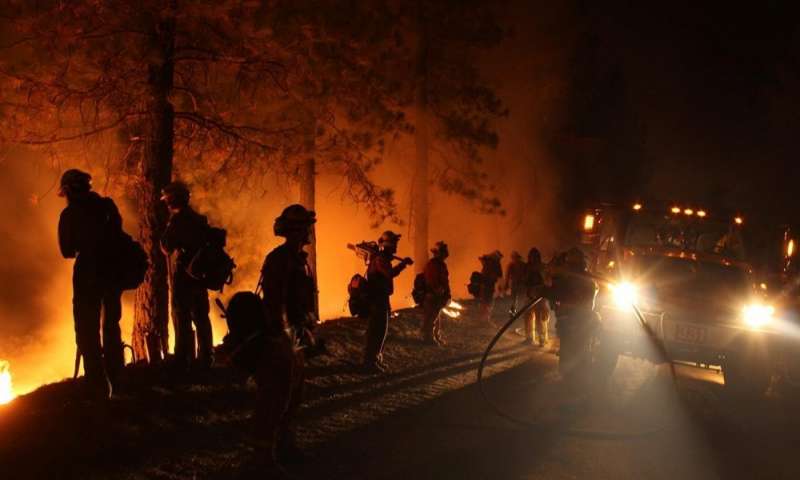 At roughly 415,000 acres, Northern California’s Mendocino Complex Fire is now the state’s largest recorded wildfire, surpassing the record held by Santa Barbara and Ventura counties’ Thomas Fire, which occurred less than a year before. Roughly 10 other large-scale conflagrations are threatening the state. And California is not yet even at the height of its wildfire season.

The trend of growing intensity and extremity of recent wildfires has triggered new research by scientists at UC Santa Barbara’s Bren School of Environmental Science & Management and at the National Center for Atmospheric Research. Their question: How is one of our most significant climate patterns—the El Niño/Southern Oscillation (ENSO)—being affected by a warming Earth and how, in turn, is that pattern affecting the likelihood and intensity of future wildfires? Their findings could have implications on land use and on wildfire fighting and prevention strategies at urban/wildland interfaces.

Their study, “ENSO’s Changing Influence on Temperature, Precipitation and Wildfire in a Warming Climate,” has been published in the American Geophysical Union journal Geophysical Research Letters.

“This paper is really saying that in fire-prone places like California and Australia, we can expect future El Niño and La Niña events to have a bigger impact on fire risk in a given year,” said Samantha Stevenson, a faculty member with the Bren School and a co-author on the paper. “That’s because the sensitivity of land temperature and precipitation to changes in tropical Pacific Ocean temperature is increasing due to climate change.”

Like many climate-based events, which take place over long timescales, tracking the ripple effects of a climate pattern can be difficult, given the many individual processes that can affect the result. ENSO—the collective name for the ocean-warming El Niño weather pattern and its complementary ocean-cooling La Niña pattern—has particularly complex and extreme teleconnections. It drives drought in some places while promoting fertile vegetation in others. Food sources may dwindle in some regions, while fresh water supplies may be built in others. In the process, human populations and their supports—such as agricultural production, energy use and fire prevention—are affected.

The researchers used large “ensemble” sets of climate simulations, projecting future climate under a business-as-usual climate scenario assuming no major efforts to combat climate change. They then examined changes in the sensitivities of regional climate to ENSO-related sea surface temperature anomalies between the historical period and the late 21st century. In addition to looking at changes in ENSO-driven temperature and rainfall patterns, one of the climate models (the Community Earth System Model, or CESM) includes a wildfire scheme that simulates the risk of fire activity based on factors such as soil moisture, fuel load and applied statistical relationships between fire season length and burned area to simulate fire activity. All of the quantities the researchers examined showed an increase in the future effects of El Niño and La Niña events—in other words, we can expect a larger ENSO-driven “bang for your buck” in the future.

“Typically what happens during an El Niño or La Niña event is you get changing atmospheric circulation patterns,” Stevenson explained. These changes in atmospheric circulation patterns, which originate in the ocean as rising or falling sea surface temperatures, in turn can cause shifts in things like wind patterns, cloud cover, atmospheric temperature and precipitation, which then affect conditions on land. According to the researchers, these impacts will be intensifying in the future as the Earth warms.

“Future ENSO is having a larger impact on the land surface since the Earth is warming—and it’s easier for land to warm than the ocean in general, because it has a lower heat capacity—so the land is going to be evaporating more moisture,” Stevenson said. Add an El Niño event on top of that, she added, and the level of evaporation will increase. With drier soils and fuels, the likelihood and intensity of wildfires are also bound to increase.

Climate scientists still aren’t sure how strong El Niño and La Niña events themselves will actually be in the future, Stevenson stressed, but what they do agree on is that events of a given magnitude will cause larger impacts to wildfire risks as the Earth warms, worsening fires in areas that already experience them, and creating conditions for them where they aren’t currently a big risk. Finding these pieces of the puzzle will be critical for future studies and wildfire fighting strategies, she said.

“To me this just really highlights the importance of getting future projections of El Niño impacts and magnitudes correct,” Stevenson said.
Article