Swings from El Niño to La Niña are likely to become wilder, with far-reaching consequences for crop yields, fire risk, and heating and cooling demand. 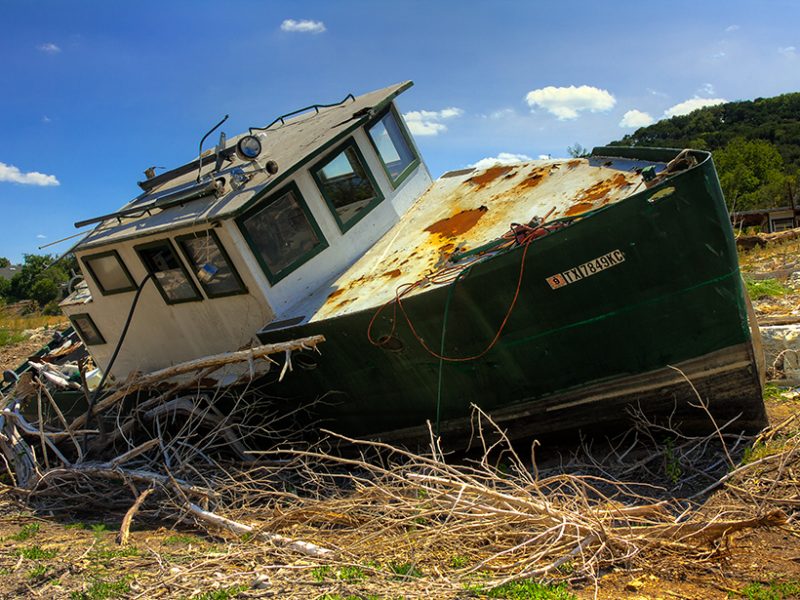 A boat sits on dry land in what would normally be a branch of Lake Travis in Texas in July 2011. The state’s record-setting heat and drought that year was attributed in part to a strong La Niña. New research finds that seasonal heat extremes in the southern half of the U.S. during a La Niña like the one that occurred in 2011 would be about 30% greater if the La Niña occurred at the end of the century. Credit: Erik A. Ellison/Wikimedia Commons

When an El Niño or its opposite, La Niña, forms in the future, it’s likely to cause more intense impacts over many land regions—amplifying changes to temperature, precipitation, and wildfire risk—due to the warming climate.

These are the findings of a new study led by the National Center for Atmospheric Research (NCAR) and published in Geophysical Research Letters, a journal of the American Geophysical Union.

“The cycling between El Niño and La Niña is responsible for some of the weather whiplash we get from year to year, particularly in the western U.S.,” said NCAR scientist John Fasullo, who led the study. “What we find when we look at model simulations of the future is that the whiplash is likely to get more severe.”

The study was funded by the National Science Foundation, which is NCAR’s sponsor, and by the U.S. Department of Energy. Study coauthors are Bette Otto-Bliesner, also of NCAR, and Samantha Stevenson, of the University of California, Santa Barbara.

El Niño events are characterized by warmer-than-average sea surface temperatures in the eastern tropical Pacific Ocean. La Niña’s, on the other hand, are defined by cooler-than-average waters in the same region. These phenomena can influence weather patterns globally, with far-reaching consequences, including changes to crop yields, fire risk, and the heating and cooling demands of homes, workplaces, and other buildings.

The impacts of El Niño and La Niña are particularly pronounced over North America’s southern tier, South America, and Australia. For example, El Niño events tend to cause cooler, wetter weather over the southern U.S. but hotter, drier weather across most of Australia and South America.

Climate model simulations have been divided in their portrayal of how climate change will influence the sea surface temperature changes associated with El Niño and La Niña events. For this study, the scientists were able to remove this effect and look at what the impact of individual events of a given magnitude would be.

The research team relied on two extensive sets of simulations, one created using the NCAR-based Community Earth System Model (CESM) and one created using the Geophysical Fluid Dynamics Laboratory Earth System Model. Each model was run dozens of times with slightly different starting conditions. Taken together, the large number of model simulations allowed the scientists to distinguish impacts linked to El Niño and La Niña from those caused by the natural chaos in the climate system.

The scientists looked at how the impacts in the present climate that are tied to a given unit of variability, for example, one degree Celsius of sea surface temperature increase during El Niño or decrease during La Niña, compared to the impacts of that same variation at the end of this century.

In addition to temperature and precipitation, the scientists were able to look at changes to wildfire danger, because CESM includes a wildfire model. This component takes into account the biomass available for burning, along with the influences of temperature and moisture.

The result was that these impacts became more severe in key land regions.

“These simulations show that the continuous rising of global mean temperature will leave regions of the U.S., including California, more vulnerable to severe droughts and widespread wildfires in the future, especially during La Nina years,” said Ming Cai, a program officer in the National Science Foundation’s Division of Atmospheric and Geospace Sciences, which funded the research.

For example, seasonal heat extremes in the southern half of the U.S. during a La Niña like the one that occurred in 2011 would be about 30 percent greater if the La Niña occurred at the end of the century. That warming would be in addition to the expected background warming of the climate system.

“We can’t say from this study whether more or fewer El Niños will form in the future—or whether the El Niños that do form will be stronger or weaker,” Fasullo said. “But we can say that an El Niño that forms in the future is likely to have more influence over our weather than if the same El Niño formed today.”