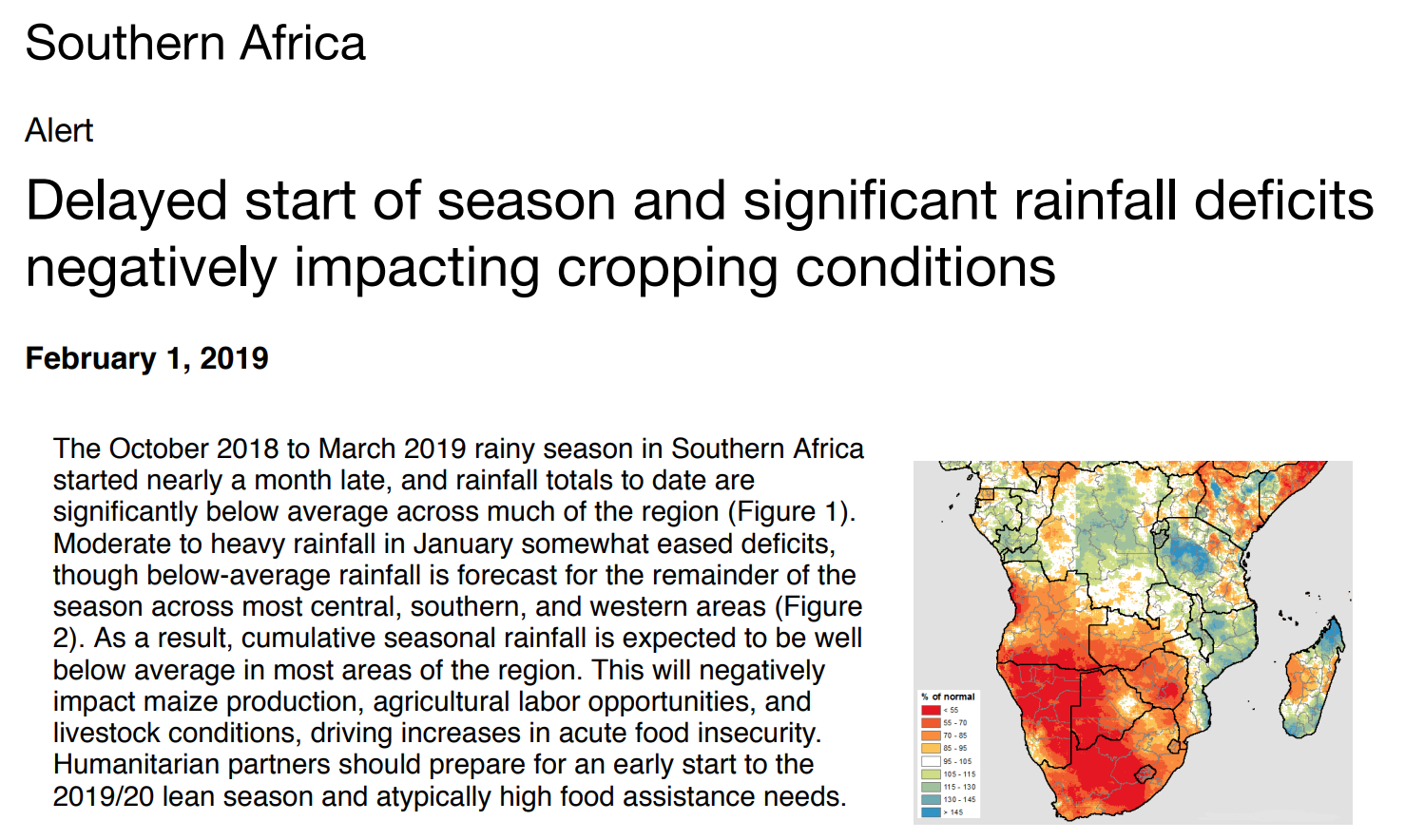 The October 2018 to March 2019 rainy season in Southern Africa started nearly a month late, and rainfall totals to date are significantly below average across much of the region (Figure 1). Moderate to heavy rainfall in January somewhat eased deficits, though below-average rainfall is forecast for the remainder of the season across most central, southern, and western areas (Figure 2). As a result, cumulative seasonal rainfall is expected to be well below average in most areas of the region. This will negatively impact maize production, agricultural labor opportunities, and livestock conditions, driving increases in acute food insecurity. Humanitarian partners should prepare for an early start to the 2019/20 lean season and atypically high food assistance needs.

The 2018/19 rainy season started 10–20 days late in most areas of the region and 30–60 days late in eastern South Africa, Lesotho, southern Mozambique, Zimbabwe, Angola, and northern Namibia. Rainfall totals in these areas are 30 percent or more below average. The delayed and below-average rainfall has been accompanied by above-average temperatures, resulting in moisture deficits across the region and drought conditions in Lesotho, central South Africa, and southeastern Botswana. Conversely, rainfall in central and northern DRC, Malawi, and parts of Madagascar and Mozambique has been average to above average with flooding reported in some areas.

The below-average and erratic rainfall across much of the region has negatively impacted crop development. Maize crops, accounting for nearly 65 percent of the region’s cereal production, are only in the reproductive or vegetative stages in rainfall-deficit areas across the region. A dry spell in mid-December in southern Zambia, Zimbabwe, and southern and central Mozambique led to crop wilting, forcing some households to replant. This will likely lead to delayed harvesting in these areas. It is anticipated that the lean season will be extended by roughly one month in Lesotho and western Mozambique. Satellite-derived images and field reports indicate that vegetative conditions are below average in some surplus-producing areas of South Africa, which play a key role in regional maize supply. However, irrigated farming in these areas is likely to prevent significant crop losses, and average growing conditions in surplus-producing areas of Zambia will also contribute to regional supply.

Livestock conditions and agricultural labor opportunities have also been negatively affected by the poor 2018/19 seasonal performance. Pasture conditions and water availability for livestock are below average in many areas, including in central South Africa and parts of Zimbabwe, Lesotho, and Botswana, where drought-related livestock deaths have been reported. Agriculture labor opportunities are also lower than normal as poor rainfall has resulted in lower levels of planting and less need for weeding, especially in Lesotho, Mozambique, and Zimbabwe. As a result, poor households have less access to income than is typical during this time of year.

Despite moderate to heavy rainfall in January, precipitation totals through the end of the season will most likely be below average across Zimbabwe, Lesotho, southern Mozambique, southern Zambia, and central South Africa. As a result, below-average production is likely in rainfed areas of these countries, though more detailed early season crop estimates for the region will be available in FEWS NET’s February Regional Supply and Market Outlook. Although prices are anticipated to remain above average in many areas through April 2019, prices are not anticipated to reach levels observed in 2016 following the El Niño-induced drought, given current normal regional maize grain supplies. Livestock body conditions are anticipated to improve in the short-term, though they will likely deteriorate atypically early in June/July, continuing through the start of the 2019/20 rainfall season. Lower than normal agricultural labor opportunities are also expected to persist throughout much of 2019. The exceptions to this include most areas of Madagascar, northern and central Mozambique, and Malawi, where average rainfall is anticipated to support normal crop production, livestock conditions, and labor opportunities.

In April/May, food security outcomes among poor households is expected to improve with the harvest. However, levels of acute food insecurity are still expected to remain higher than normal as many poor households are likely to experience a below-average harvest and access a lower number of labor opportunities and income from selling crops. FEWS NET anticipates the next lean season will most likely start atypically early in August/September in several areas of the region, and households will have limited purchasing power due to lower incomes. Additionally, household access to milk will be lower than normal driven by poor livestock body conditions. Consequently, atypically high levels of acute food insecurity are likely during the 2019/20 lean season in most countries across the region, except in Madagascar, Malawi, and northern Mozambique. Atypically high needs will also be driven by conflict in DRC and poor macroeconomic conditions in Zimbabwe. Although outcomes are not expected to be as severe as those following the 2015/16 drought, humanitarian partners should prepare for a likely earlier than normal start to the 2019/20 lean season and higher than normal food assistance needs during this time.