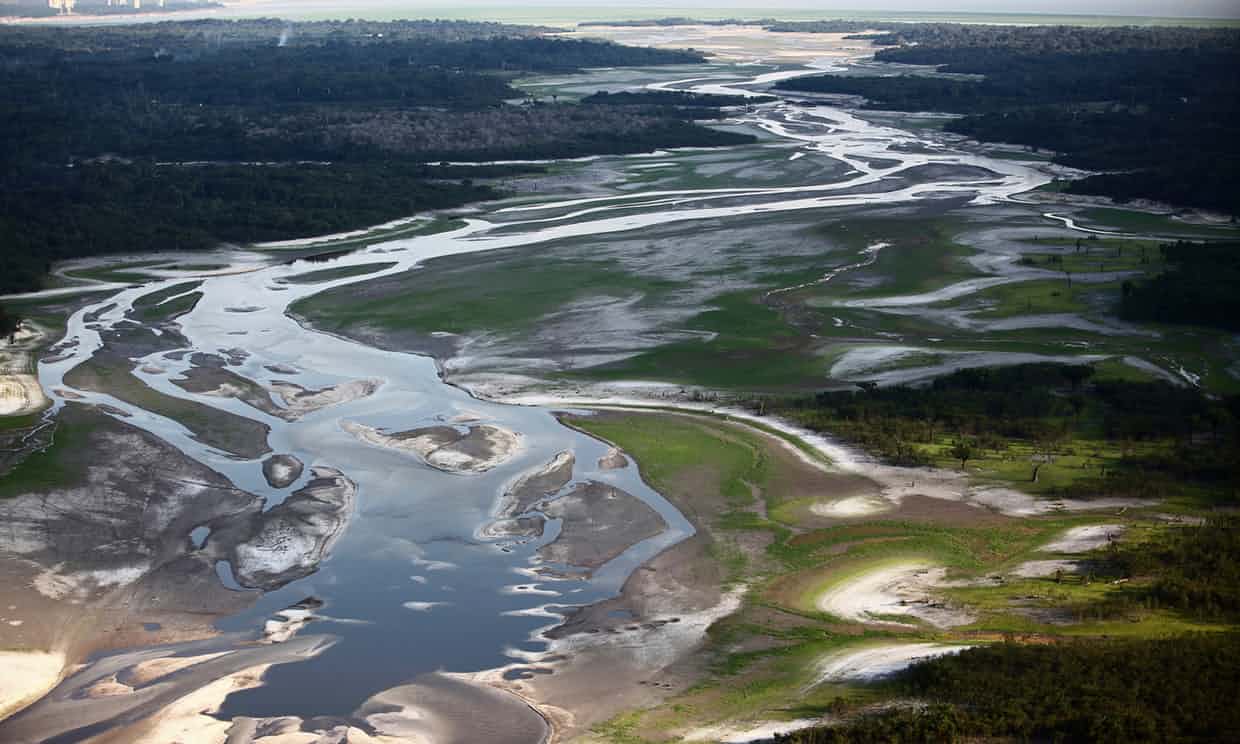 Aerial view of a drought-affected area within the Amazon Basin on November 5, 2010 in Manaus, Brazil. Photograph: Rodrigo Baleia/LatinContent/Getty Images

If you are like me, you picture the Amazon region as an ever lush, wet, tropical region filled with numerous plant and animal species. Who would imagine the Amazon experiencing drought? I mean sure, if we think of drought as “less water than usual,” then any place could have a drought. But what I tend to envision with respect to drought is truly dry.

People who work in this field have a more advanced understanding than I do about drought, how and why it occurs, its frequency and severity, and the impact on natural and human worlds. This recognition brings us to a very interesting paper recently published in Scientific Reports, entitled Unprecedented drought over tropical South America in 2016: significantly under-predicted by tropical SST[sea surface temperature]. So, what did this paper show?

Well, the Amazon region does encounter periodic droughts. There was one in 2005, another in 2010, both of which were 100-year events, and the most recent one in 2015-2016. The authors of this study, Amir Erfanian, Guiling Wang, and Lori Fomenko, all from the University of Connecticut, measured drought in three ways. They quantified the precipitation deficits and water storage on the ground. They also used two different vegetation measures of drought. The results showed that the most recent drought was unprecedented in severity. The video below shows a brief visual overview of the findings of this paper:

But the authors really wanted to know why the drought occurred in the first place and why it was so severe. Droughts in the Amazon region are mainly driven by surface water temperatures in the neighboring oceans, particularly in the El Niño/La Niña region. So, the authors looked at the relationship between changes in precipitation and sea surface temperatures in tropical oceans. They found that warmer than usual water in the Atlantic and Pacific oceans was the main driver for the reduced rainfall during the three extreme droughts in the past decade.

The authors also found that the water temperatures alone could not adequately explain the size and severity of the 2015-2016 drought. This suggests that there are other factors involved as well. To be clear, the authors found that the relationship between water temperatures and drought worked well for prior droughts (the 2005 and 2010 droughts as well as 1983 and 1998 droughts, also El Niño years) but fell apart in 2015-2016. That is, using the relationship, the predicted 2015-2016 drought should not have been nearly as severe or as large as it was. The paper also reports that the 2015-2016 drought clearly exceeded that of the 100-year events in 2005 and 2010. So, in approximately one decade, this zone has had three 100-year events. Quite astonishing.

So why was SST unable to explain the 2015-2016 drought, like it had for past events? Part of it has to do with land-use changes. That is, human changes to the land surface such as deforestation. Another part is related to warming from greenhouse gases. It is clear that land-use changes can affect drought. As farmers deforest, for instance, they convert woodlands and forests into agricultural land. This changes not only the darkness (reflectivity) of the land, but it also impacts the transfer of water to and from the atmosphere (evapotranspiration).

One might ask how warming affects droughts. As air temperatures increase, air is able to evaporate water more rapidly and dry out surfaces. At the same time, air can contain more water vapor so that when rain does occur, it is more often in heavy downpours. These two changes underlie what is referred to as an accelerated hydrological cycle. Simply put, man-made warming is accelerating the movement of water through the ecosystem, which can cause drought even if precipitation does not decrease. Warming also causes changes in the large-scale patterns of air motion (atmospheric circulation) that reduces rainfall in this region.

I communicated with the senior author, Dr. Wang, who told me:

“Since oceanic forcing could not fully explain the severity of the latest drought, one will have to account for the roles of greenhouse gas warming, land use land cover changes, and/or dynamic ecosystem feedback in order to advance the understanding, attribution and prediction of extreme droughts in this region. The frequent recurrence of severe droughts in the recent decade may be a precursor of what the future might have in store for this regional climate and ecosystem.”

So why do we care? Well, for a number of reasons. First of all, droughts in this part of the world create an increased risk for desertification and fire occurrence and hurt the region’s ecosystem, harm trees, and accelerate the release of carbon dioxide. We know that the 2005 drought, which was a 100-year event, led to a record number of wildfires and increased emissions. We also know that similar consequences occurred five years later during the 2010 drought. Similarly, smaller droughts in Brazil in 2007 and 2012 caused widespread water supply problems, particularly in densely populated locations.

To make a long story short, investigating these additional factors may help better explain the most recent Amazon drought. Simply using the past relationship between SST and drought was not a sufficient explanation. This finding, and the recognition that droughts present real consequences for both human societies and natural ecological systems, should motivate us to take actions to reduce harm in the future.