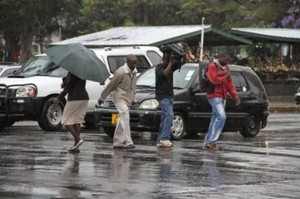 There is a 90 percent chance that an El Nino will develop during the October to December period.

ZIMBABWE should brace for yet another drought in 2016 as climatic predictions by the Southern African Regional Climate Outlook Forum (SARCOF) of normal to below normal rainfall season clearly spell disaster for the country’s agricultural season. Although the prediction is for the whole of southern Africa,  countries in the southern parts of the region namely Zimbabwe, Botswana, Mozambique and South Africa should brace for a  drought year unlike the region’s northern countries. Predictions by SARCOF have been corroborated by the Famine Early Warning Systems Network (FEWSNET).

In its August 2015 report, FEWSNET predicts an El Nino from October to December as well as a below to average rainfall forecast for parts of the southern African region. El Nino is an irregularly occurring and complex series of climatic changes affecting the equatorial Pacific region and beyond every few years, characterised by the appearance of unusually warm, nutrient-poor water off northern Peru and Ecuador, typically in late December. The effects of El Niño include reversal of wind patterns across the Pacific, drought in Australasia, and unseasonal heavy rain in South America.
“As the 2015-16 agriculture season draws nearer, there is a 90 percent chance that an El Nino will develop during the October to December period. Historically, El Nino conditions are associated with below-average and erratic rainfall in the southeastern parts of the region during this period. These conditions might result in a late start of season in the southern parts of Mozambique, Malawi, and Zimbabwe,” said FEWSNET.

“If these El Nino conditions were realised during the 2015-16 season, this would be the second consecutive year of poor rainfall for southern parts of the region,” the report said.

Historically, El Nino raises chances of receiving below-average rainfall during the main crop-growing season in southern Africa. However, not all locations are equally affected by El Nino in the region. Meteorological Services Department director, Amos Makarau, confirmed that there was a high probability of below normal rains for Zimbabwe. “However, it is the Ministry of Agriculture which will determine whether Zimbabwe will experience a drought or not. Similarly, the Department of Water will also give its outlook regarding hydrological drought,” Makarau said.

“As of now, there is still plenty of water for irrigation, which, if properly resourced and with commitment by all players, the situation will not be that bad. Secondly, despite a gloomy forecast, the rains should be better for the northern provinces of the country for the second half of the season. For now we are worried about the onset. It should be noted that this is only an outlook. We will provide more details and updates in the next few days,” Makarau added.

The bleak forecast comes as Zimbabwe is yet to absorb the full impact of the poor rainfall during the 2014/15 summer which saw half of the crop being written off. Farmers were only able to produce 742 226 tonnes of maize this past season against 1 456 153 tonnes produced across the country last season, causing a cumulative 56 percent drop in harvested maize.

With 1,5 million people facing hunger across the country’s 60 rural districts, millers are planning to import 890 000 tonnes up to May next year from South Africa and Zambia. The World Food Programme (WFP) says food insecurity in Zimbabwe has increased by 164 percent on last year’s situation. “Although Zimbabwe has some 4,3 million hectares of arable land, only 2,8 million hectares of land were cultivated during the 2014/15 cropping season due to high fuel costs, and climatic shocks to name a few,” says WFP, adding: “In Zimbabwe, where drought is the most common climatic threat to agricultural production, only 7,6 percent of farmers practice conservation agriculture.

“Zimbabwe is considered a low-income, food-deficit country, ranked 156 out of 187 developing countries on the Global Hunger Index, which measures progress and failure in the global fight against hunger.”

The Zimbabwe Vulnerability Assessment Committee report, compiled by a consortium comprising government, United Nations agencies, non-governmental organisations and other international organisations, has noted that: “Rural food insecurity has remained high in Zimbabwe over the past decade due to a combination of unfavourable weather conditions, low productivity, high poverty levels, vulnerable livelihoods, high food prices, among other factors.” Zimbabwe Commercial Farmers Union president, Wonder Chabikwa, said the country now needs to plan for the worst side of the season. “We need to find ways to mitigate the impact of the drought because we do not want any shocks at the end of the season,” he said.

Chabikwa said focus should be on reviving the 250 000 hectares of land under irrigation especially in Manicaland and Mashonaland through the provision of medium to long-term loans to commercial farmers.
The 250 000 hectares of irrigable land are capable of producing the two million tonnes of maize needed to feed the nation. “For the dry land farmers we urge them to plant the small grains crops such as millet, sorghum and the cowpeas. The Department of Research Services has varieties that are bird resistant including the white sorghum variety, it is now available.

“Since every farmer is interested in planting maize we urge them to plant the short season varieties so that they are guaranteed of a harvest,” Chabikwa said. Agricultural expert, Vincent Gwarazimba, said no one will finance agriculture in Zimbabwe until the country has corrected its toxic policies. He said:

“Private companies and industries are broke to finance any meaningful agriculture. In any case, who will finance unreliable farmers? There is a problem in Zimbabwe. These are the issues: Government is broke, farmers are unreliable, industry is dead and broke, agricultural commodity dealers are extortionists, government policies are toxic and inconsistent, government has no plan for agriculture let alone the economy.”