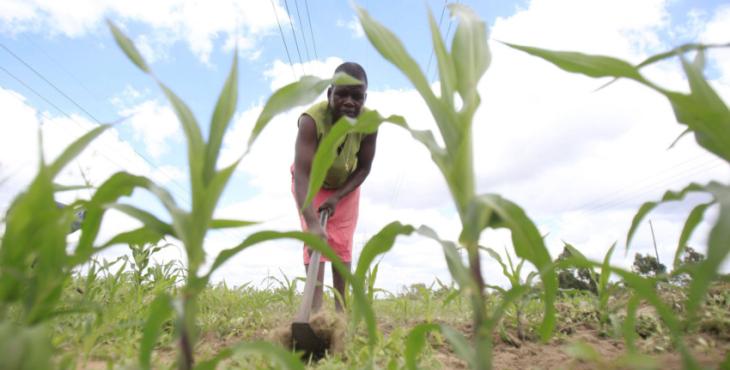 A Zimbabwean woman tends a crop of maize near Harare. About 14 million people face hunger in southern Africa because of the drought conditions affecting much of the region, according to the UN World Food Programme. Picture: Philimon Bulawayo, Reuters

Harare – Food inflation is on the rise in most southern African countries as economies such as Zimbabwe, Zambia and Malawi battle the effects of the El Niño which has resulted in drought.

Rising inflation in Malawi, Namibia and Zambia has put monetary policy authorities in these countries in check, with prices for scarce food supplies pushing up living costs, according to economic analysts.

In Zimbabwe, farmers are already facing dire prospects as rains came late and have merely been a trickle compared with previous years.

The World Food Programme (WFP) said this week that more people were facing hunger and food shortages in a region that had traditionally catered for its food needs.

The El Niño phenomenon has brought about late rains in Zimbabwe while dry weather conditions have persisted in South Africa and Zambia.

Economist Jeffrey Kasirori said food inflation in the region was already rising “because of the food shortages and competition between human consumption and animal stock-feeds”, which were set to worsen as the dry season wore on.

He said Zimbabwe was in deflation owing to its usage of a stronger currency (the US dollar after it ditched its own Zimdollars in 2009) while neighbours such as Malawi, Zambia and South Africa faced “currency weaknesses which would also translate to sluggish performance in their economies” and worsen inflation.

“Looking ahead, the inflation predicament is not set to ease in coming months, particularly on the back of the kwacha’s continuing struggles and ongoing drought conditions due to the El Niño phenomenon,” said Hanns Spangenberg, an analyst at NKC African Economics.

He added that in Namibia, maize meal product prices were set to increase by about 10 percent and wheat flower prices by about 6 percent. This would add upward pressure on local inflation in the first half of this year in addition to the adverse impact of a recent rout in the exchange rate, he added.

According to the WFP, the worst hit areas in the region are Malawi, where 2.8 million people face hunger, Madagascar (nearly 1.9 million people) and Zimbabwe (1.5 million).

Lesotho has also declared a drought, with up to a third of the country’s population facing food insecurity amid looming water scarcity in other regional countries.

“I’m particularly concerned that smallholders won’t be able to harvest enough crops to feed their own families through the year, let alone to sell what little they can in order to cover school fees and other household needs,” WFP executive director Ertharin Cousin said.

WFP said about 14 million were facing hunger across southern Africa.

The dry weather conditions will also affect irrigation, with most dams low and critically low water levels in the big Kariba dam resulting in curtailed hydro-electricity generation to Zimbabwe and Zambia.

“Driving through southern Zambia, I saw fields of crops severely stressed from lack of water and met farmers who are struggling to cope with a second season of erratic rains. Zambia is one of the biggest breadbaskets in the region and what’s happening there gives serious cause for concern not only for Zambia itself but all countries in the region,” Cousin said on conclusion of a visit to southern Zambia.

Zimbabwe’s agriculture sector was only starting to recover after the devastating effects of a land reform programme that displaced white commercial farmers and replaced them with inexperienced and poorly capacitated black farmers.

However, further worsening the situation for the country is a rush by farmers to grow the tobacco cash crop and abandon maize and other grain crops.