Ethiopia, a Nation of Farmers, Strains Under Severe Drought 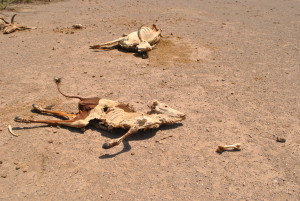 Carcasses of cattle litter the landscape in northeastern Ethiopia. More than 80 percent of Ethiopia’s population works in agriculture, making the country especially vulnerable to drought. Credit Jacey Fortin for The New York Times

MIESO, Ethiopia — Every day, Yasin Mohammed Aliye stakes out a spot on his small farm to chew khat leaves, a stimulant, and guard against intruders.
Stories from Our Advertisers

The khat, he explains, helps to dull the hunger.

“We got just one day of rain each month during the rainy season,” Mr. Yasin said, referring to the days from July through September. “It should have been raining every other day. Now my harvest has failed.”

The green hills and full fields around here belie an alarming fact: This is the worst drought Ethiopia has experienced in more than a decade.

The stream bordering Mr. Yasin’s farm has run dry, and the trenches he dug to irrigate his land never filled. He has sown seeds three times this year, each time anticipating rains that never came. His corn and sorghum stalks are stunted and will yield no harvest. He has sold four of his eight cows at a steep discount in order to buy corn at nearly double last year’s market prices.
Continue reading the main story
Related in Opinion

Mr. Yasin, 50, now regularly skips meals. He worries that the animals he has left to sell will not be enough to sustain his family until the next harvest season. If all else fails, he will move west, where the rains have been more reliable. 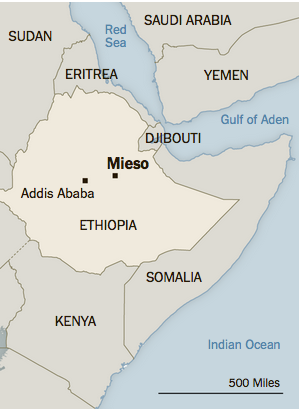 By The New York Times

“Other farmers are already leaving,” he said. “When they go, they ask me, ‘Why are you staying here to die?’ ”

The strength of this year’s El Niño, a water-warming phenomenon in the Pacific Ocean, has decimated rainfall levels across large stretches of Ethiopia and, in a cruel twist, may also bring flooding to some areas in the coming months, according to Ethiopian officials, the United Nations and the Famine Early Warning Systems Network, a crisis monitoring group created by the United States Agency for International Development.

This month, the Ethiopian government announced that about 8.2 million people are in need of food assistance, up from the 4.55 million estimated in August.

More than 80 percent of Ethiopia’s population works in agriculture, which makes up about 40 percent of the nation’s economic output. That makes the country especially vulnerable to drought and the effects of climate change. After a drought in 2002, gross domestic product shrank 2.2 percent, according to World Bank data.

Such droughts bring back painful memories of 1984, when a devastating famine made international headlines and turned Ethiopia into a poster child for humanitarian aid.

But the country, Africa’s second most populous, has been working for years to shed that reputation.

Since coming to power in 1991, the governing Ethiopian People’s Revolutionary Democratic Front has made strides in reducing poverty and building roads, schools and health clinics. The government has claimed double-digit economic growth rates over the past decade.

But the government has a poor record on civil liberties and multiparty democracy; an election in May handed all 547 seats in Parliament to the governing coalition and its allies. When the following months brought a disappointing rainy season, critics accused officials of playing down the severity of the crisis.

But Mitiku Kassa, secretary of the National Disaster Prevention and Preparedness Committee, said the government had been proactive, having allocated $192 million for food aid, water transport, animal feed and other assistance since July.

“The response was quite fast because the early warning system is well developed in Ethiopia,” he said.

Still, it is not enough, and outside money is needed. The recent re-evaluation of food assistance needs raised the government’s international funding requests to $596 million from $432 million. About 43 percent of that has been supplied by international partners, but much of it has already been spent.

“The government has shown remarkable leadership so far,” said David Del Conte, the deputy Ethiopia country director for the United Nations Office for the Coordination of Humanitarian Affairs. “They have contributed a lot of funding because they understand that support from the international community will take time to kick in.”

“But we’re still in the early stages of what we believe will be a one-year crisis,” Mr. Del Conte added. A September report from his organization projected that 15 million people could be in need of food aid in 2016.

In the meantime, farmers and herders in affected areas continue to sell off dwindling resources. And while places like Mieso do not appear at first glance to be battling drought, there are already areas where the signs of impending disaster are clear. In the Amibara area in the northeastern Afar Region, the rocky sand is littered with cattle carcasses.

“About 30 of my family’s cows died this year because there is no grass,” said the Afari animal herder Humed Kamil, 42, a father of seven who is slowly selling off his remaining animals to buy food from the market. “We’re surviving, but we’re facing a lot of problems. We don’t have milk or beef now. We only eat the corn that we buy.”

Since 2005, the government has been distributing aid through a system that delivers food to citizens in exchange for labor on development projects like construction, terracing or irrigation. Those who are not able to work are also eligible for benefits. But the last round of the program ended in July, and it will not start up again until January.

Mr. Yasin participated in the program in June, securing some cattle feed after he helped build a fence for a school. He has not received anything since, he said, contending that the government is not doing enough to help him.

While the safety-net program is on hiatus, Ethiopia and international partners are handing out emergency aid. But limited resources have forced distributors to focus on the hardest-hit areas. In Mieso, Taha Ido, 45, watched as government workers unloaded sacks of wheat not far from his home. But the food was not for him, even though his crops failed this year.

“The government is trying its best, but they only have a limited amount, so that aid was for people nearby who were faring even worse than us,” he said. “But it’s O.K. We’re happy for them. They are hungry just like we are.”

Like so many others in the area, Mr. Taha’s family has resorted to selling firewood to make ends meet. In Mieso and surrounding areas, the main roads are lined with burlap sacks bursting with wood or charcoal. Women and children, hoping to bring in a sliver of income to purchase their next handful of corn or wheat, wait patiently with their wares as cars and trucks whiz by.

Others, like Mr. Yasin, will stick to selling livestock to stave off hunger for as long as possible.

“We’ve eaten nothing but corn for a year, and now we’re afraid of losing that, too,” he said. “But I will keep trying, and selling animals, until I finish everything.”