The Strongest Hurricane Ever Recorded Is Heading for Mexico

The strongest hurricane ever measured in the Western Hemisphere is hours from striking near Mexico’s biggest port and a popular holiday resort, threatening catastrophic damage to property and posing danger to the lives of anyone caught in its path.

Hurricane Patricia is forecast to go ashore between Puerto Vallarta and Manzanillo on Friday with winds as high as 200 miles (323 kilometers) per hour, or Category 5 major storm strength, according to the U.S. National Hurricane Center in Miami. 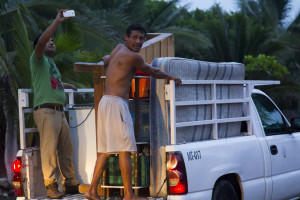 The “extremely dangerous” Patricia will hit Mexico with life-threatening mudslides and flash floods and may reach into Texas with flooding rain as a record-setting year for tropical systems continues, according to the National Weather Service.

“With this type of wind the damage is catastrophic; there are very few structures that withstand this” strength of hurricane, Dennis Feltgen, a meteorologist and spokesman for the National Hurricane Center, said Friday by phone from Miami. “The trees are long gone, we’re talking buildings ripped off foundations.”

Patricia is bearing down on a part of Mexico that is home to Pacific beach resort Puerto Vallarta and Manzanillo, the nation’s busiest container port. Manzanillo also has a liquefied natural gas terminal and a rail line operated by Ferromex, a railroad owned by Grupo Mexico SAB and Union Pacific Corp. Guadalajara, Mexico’s second-biggest metropolitan area, is about 125 miles from the coast.

“Residents in low-lying areas near the coast in the hurricane warning area should evacuate immediately, since the storm surge could be catastrophic near and to the east of where the center makes landfall,” said Jack Beven, a senior hurricane specialist at the hurricane center.

Hurricane Katrina, which killed more than 1,800 people, was a Category 3 storm when it reached landfall. While it’s unclear what Patricia’s wind speed will be when it hits land, it’s forecast to be Category 5 level.

Patricia, the most powerful storm ever in the Eastern Pacific and Atlantic basins, tops the list of the strongest systems recorded anywhere in the world since 1970, including Typhoon Haiyan, which killed more than 6,000 people in the Philippines in 2013, said Phil Klotzbach, lead author of the Colorado State University seasonal hurricane forecast.

“Allegedly there were a whole bunch of storms stronger in the 1950s and 1960s, but those estimates were likely out to lunch,” Klotzbach said. “Of course, they estimated Haiyan’s intensity from satellite, not aircraft, so Haiyan could certainly have been as strong, or stronger, than Patricia currently is.”

The system is just this year’s latest record-breaking storm. Typhoon Koppu flooded the Philippines starting late last week and claimed about 40 lives, while Hurricane Joaquin sank the container ship El Faro in the Bahamas at the beginning of the month, killing 33 crew members.

Klotzbach said a record 22 Category 4 and 5 storms have formed across the Northern Hemisphere this year, besting the old mark of 18 set in 1997 and 2004. Reliable data for the entire hemisphere goes back only to about 1985, Klotzbach said.

Patricia grew from a tropical depression on Tuesday to a Category 5 hurricane Thursday at 10 p.m.

“In terms of intensification rate, it’s certainly one for the record books,” Klotzbach said. “I think we will need to wait for post-storm reanalysis to get a better idea of exactly how quickly this one intensified, but it’s certainly the fastest intensifier in the Northeast Pacific on record, breaking the old record set by Linda in 1977.”

“My thought is this is a very extreme event, one of the most intense ever observed in modern history,” said Mark Bove, a senior research meteorologist with Munich Reinsurance America in Princeton, New Jersey.

The storm may strike the coast with a 15- to 23-foot (4.5-7 meter) storm surge, causing severe coastal flooding as it comes ashore, said Paul Walker, a meteorologist with AccuWeather Inc. in State College, Pennsylvania.

“It is going to hit pretty hard,” Walker said. “It is a Category 5 and we’re not expecting a whole lot of weakening.”

In addition to wind and storm surge damage along the coast, Patricia could drop 12 inches (30 centimeters) of rain across Mexico, with some areas getting up to 20 inches, the hurricane center said.

Because Patricia’s most intense winds are tightly wound around its center, “the worst impact of this will be concentrated in a very small area where the eye comes ashore,” Bove said. If the current track holds, Puerto Vallarta and Manzanillo may be spared the worst.

Hurricane-strength winds reach out 35 miles from the core, while the most powerful Category 5 winds only occupy an area about 15 miles across, according to the hurricane center.

Patricia’s threat won’t stop even after it degenerates. Moisture from the storm will pour into eastern Texas, threatening a large part of the state — from San Antonio to Houston and as far north as Dallas — with 8 to 10 inches of rain, Walker said.

There is a chance another tropical system could spawn near the Texas coastline, made up of a weather front coming across the U.S. and the remnants of Patricia. Central Texas is already being drenched with heavy rains from another system, the U.S. Weather Prediction Center said Thursday, and almost 5 inches will fall through Friday. More than double that will occur over the next five days.