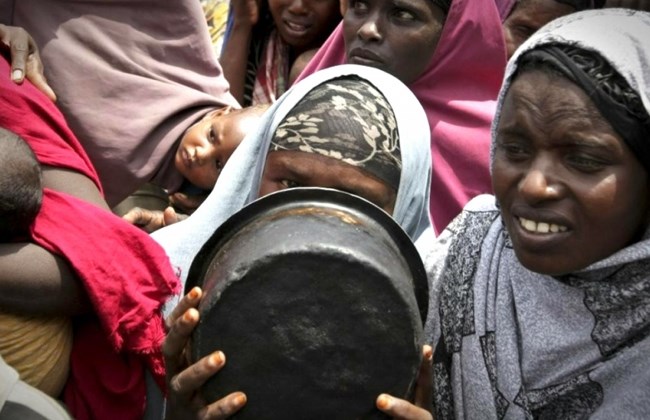 People in Southern Somalia are desperate for a morsel of food. REUTERS/Ho New

NAIROBI: The number of Somalis in hunger has risen in the past six months, the United Nations said Monday, predicting a further spike as the Horn of Africa nation braces itself for the worst flooding in decades.

Following a poor cereal harvest caused by an early end to the rainy season, there has been a 17 percent increase in the number of Somalis in food crisis, up to 855,000 people, two-thirds of whom are internally displaced. “The country’s humanitarian situation remains alarming,” the U.N. said in a statement.

Somalia experienced a devastating famine in 2011, caused by drought, war and lack of access to humanitarian aid.

Scientists fear Somalia will face severe flooding due to the El Nino phenomenon, a warming of sea-surface temperatures in the Pacific.

This phenomenon is strengthening and is likely to peak in three to seven months’ time, the Australian Bureau of Meteorology said.

Sea-surface temperature anomalies in the Pacific Ocean are set to climb to the highest in 19 years.

This El Nino is predicted to be the biggest since the last major event in east Africa in 1997, which caused heavy rains and flash floods.

“This is likely to lead to disease, loss of crops and property, and to deterioration in the food security and nutritional situations,” the U.N. said.

In Somalia, 3.1 million people – about one third of the population – need emergency aid of some kind.

Some 215,000 children under 5 are malnourished, most of them living in settlements for the internally displaced, where global acute malnutrition rates are consistently above the emergency threshold of 15 percent, the U.N. said.

There are about 1.1 million internally displaced people in Somalia, who experience child labor, sexual and gender-based violence and forced family separations, it said.

Food security assessments are carried out twice a year following the Gu and Dehr rains.

“We all need to do more,” the new U.N. humanitarian coordinator for Somalia, Peter de Clercq, said at a media briefing Monday in the Somali capital, Mogadishu.