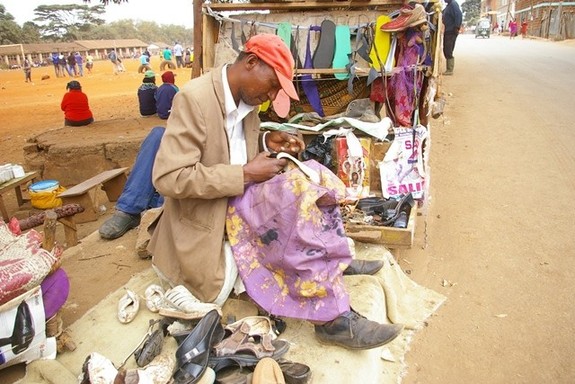 A man repairs shoes along the streets of the Thika Super Highway in Nairobi, capital of Kenya, July 23, 2015. [Photo/Xinhua]

East African nation capital has experienced unusually heavy rains in the capital Nairobi in the last two days, signaling the start of the much-anticipated rain.

“Most parts of Kenya will receive enhanced rainfalls during October and December in 2015. The rains may extend into January 2016,” said the Kenya Meteorological Department in an update at the beginning of the month.

However, the delay of the rains made Kenyans make jokes of the update. The rains now usher in a tough period for Nairobi residents that will involve heavy traffic jams, high fares, flooding, displacement and destruction of property, power blackouts, blocked drainages and diseases.

Road accidents are also expected to rise due to poor visibility and slippery roads.

“I am getting nervous; the long-awaited rains are finally here. This means tough times for residents. An umbrella and raincoat will be my companion for the next two months,” Jared Njuguna, a banker and a resident of Nairobi West, said Sunday.

Njuguna is among the area’s residents who are praying hard that it does not flood in the estate. The last time it rained, most residents lost their property to floods, and the memories are still fresh.

“I stay in a flat in the estate, while I may be assured that my household items may not be destroyed when it rains heavily, I may not be able to access my house,” he said.

Charles Okoth, a pharmacist in Nairobi, prayed that the measures the national and county government put in place work.

“We have been told the drainage system has been unblocked and the hospitals have been stocked with drugs. We hope all these measures will work because I fear for citizens if they don’t, the kind of rains we have witnessed in Nairobi in the last two days signal tough times,” said Okoth.

However, it was certain that Nairobi residents should brace for the worst as many roads were flooded with rainwater on Sunday, making navigation tough.

Major highways Sunday morning recording minor accidents blamed on poor visibility, floods and slippery roads. Thika superhighway is among roads in the capital Nairobi that experienced a high number of accidents Sunday morning due to the rains.

One of the accidents happened at Ndarugo along the Thika where the matatu (mini-bus) carrying passengers plunged into a river, as it was drizzling, with several people sustaining injuries.

Another accident along the superhighway happened between Homeland and Rosters causing a heavy traffic snarl-up early morning.

“The expected enhanced rainfall is likely to lead to muddy and slippery conditions on the roads in most parts of the country. Accidents may occur as vehicles veer suddenly due to slippery conditions,” noted the Meteorological Department.

Motorists were, therefore, advised to drive carefully to avoid accidents that may emanate from the poor road conditions, which include fog in some areas.

However, while many Nairobi residents are bracing for tough times due to the rains, some are happy that they have started.

“The good thing with these rains is that Nairobi air feels fresh. For a long time, I am taking in fresh air from the comfort of my apartment. Not the usual dust,” said Grace Onyino, a resident of Buru Buru.

With the onset of the rains, Onyino as many other city residents are also assured of constant water supply, which means less money spend on the commodity.