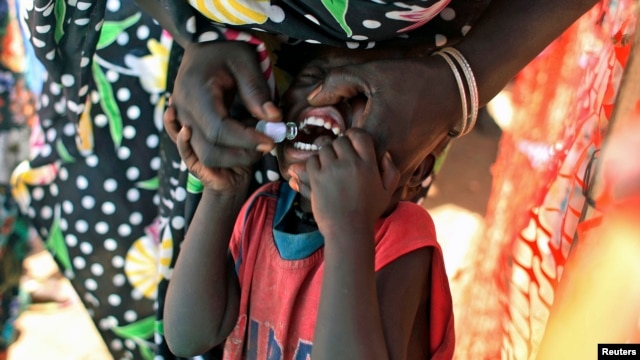 GENEVA— The World Health Organization is stepping up efforts to control multiple cholera outbreaks in Africa and the Middle East to prevent the disease from spreading and threatening the health of thousands of people.

More than 10,700 cholera cases and 170 deaths are reported in five countries in the Eastern Mediterranean and African regions, Iraq, Bahrain, Kuwait, Democratic Republic of Congo and Tanzania.

WHO officials say they are alarmed at the prospect of this deadly disease spreading if urgent control measures are not taken.

WHO’s Dr. Dominique Legros, who heads U.N. agency’s Department of Pandemic and Epidemic Diseases, says he is particularly worried about the cholera situation in the African Region where the worst El Nino conditions in the past 20 years are forecast.

He says this weather phenomenon is expected to trigger torrential rains in the coming months and cause an upsurge in water-borne diseases, including cholera.

“The last time we had that situation in Eastern Africa was in 1997-‘98 in four countries of the region: Tanzania, Uganda, Mozambique, Kenya,” he said. “At that time, we had within two years 200,000 cases of cholera and 8,000 deaths … we have to really be ready for this and try to control the outbreak as soon as possible.”

Tanzania has nearly 5,000 cases of cholera including 74 deaths. The capital, Dar Es Salaam, is hardest hit with 3,500 cases reported since mid-August.

WHO has recorded nearly 4,000 cases of cholera, including 95 deaths in Democratic Republic of Congo. Legros says a team is being sent to Equateur Province, the scene of a recent cholera outbreak, to see how to prevent spread of the disease down the Congo River.

Iraq has more than 1,800 cholera cases and one death reported. Legros says a vaccination campaign is planned at the end of the month in Erbil and Dohuk to try to contain the disease.

“We have alerted all the countries of the region affected by the Syrian crisis to get them prepared for a possible extent of the cases towards other countries of the Middle East,” he said, adding that control efforts are being hampered by a vaccine shortage.

Legros notes last year only two million doses of cholera vaccines were available in Africa where about 40 million people are exposed to this fatal disease.