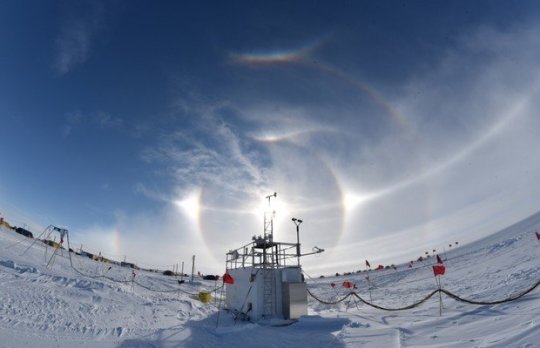 Strong El Nino played a major role in warming the air above the ice, researchers report

An area of West Antarctica more than twice the size of California partially melted in 2016 when warm winds forced by an especially strong El Nino blew over the continent, an international group of researchers has determined.

In the June 15 issue of the journal Nature Communications, they report that the warm spell persisted for more than two weeks in January 2016. Satellite data revealed a mix of melted snow and ice over most of the Ross Ice Shelf — a thick platform of floating ice that channels about a third of the ice flowing from the West Antarctic Ice Sheet into the ocean.

While researchers have been gathering evidence for years that warm ocean water is melting West Antarctic ice shelves from beneath, this is one of the first times they’ve been able to document how warm air could also cause widespread melting from above.

As it happens, researchers had installed the necessary instruments to investigate these processes in West Antarctica only a few weeks earlier, as part of a study to better understand how clouds affect the amount of energy that reaches the snow surface and influence its temperature.

“We were extraordinarily fortunate to be able to deploy state-of-the art equipment to West Antarctica just before this large melt event occurred,” said Dan Lubin, principal investigator of the Atmospheric Radiation Measurement (ARM) West Antarctic Radiation Experiment (AWARE). Lubin is a research physicist at the Scripps Institution of Oceanography in La Jolla, California and a coauthor of the Nature Communications study.

Julien Nicolas, lead author of the paper, is a research associate at the Byrd Polar and Climate Research Center (BPCRC) at The Ohio State University. He’s part of the OSU team that provides weather and climate analysis for AWARE.

When Nicolas got a January 2016 alert from the AWARE expedition that the weather at their campsite atop of the West Antarctic Ice Sheet had turned unseasonably warm, he checked to see in the satellite data what was happening to the rest of West Antarctica.

The presence of water in the snow is often hard to detect from visible satellite imagery, especially if clouds block the view. Instead, Nicolas analyzed satellite measurements of the microwave radiation emitted by the snowpack, since dry and wet snows have very different microwave signatures.

What he saw during the melting event was an area of roughly 300,000 square miles, including most of the Ross Ice Shelf, that likely contained a mix of snow and water.

“What probably happened is that the surface snowpack was able to contain the meltwater, acting as a buffer and preventing the formation of melt ponds and streams that can be common on some Antarctic ice shelves,” Nicolas said, “but we cannot rule out the presence of standing water in many locations.”

What makes this event particularly interesting to scientists is that it took place during one of the strongest El Nino events on record.

“This conjunction of events was no coincidence,” he said.

During an El Nino, warm waters from the equatorial Pacific Ocean move east. El Ninos also favor weather patterns that steer warm air towards West Antarctica, but strong westerly winds that blow over the ocean to the north of the continent usually keep the warmer air at bay.

BPCRC senior research associate Aaron Wilson, also a coauthor on the study, used climate models to show that melt events in West Antarctica are more likely to occur during El Nino conditions, especially when westerly winds are weak. What makes this January 2016 event unique, he explained, is that the warming occurred despite strong westerly winds.

“Without the strong westerlies, it’s likely there would have been much more melting,” Wilson said.

Coauthor David Bromwich, professor of geography and leader of the Ohio State team, explained it this way: “In West Antarctica, we have a tug-of-war going on between the influence of El Ninos and the westerly winds, and it looks like the El Ninos are winning,” he said. “It’s a pattern that is emerging. And because we expect stronger, more frequent El Ninos in the future with a warming climate, we can expect more major surface melt events in West Antarctica.”

More frequent melting would accelerate the general deterioration of the ice sheet, he concluded.