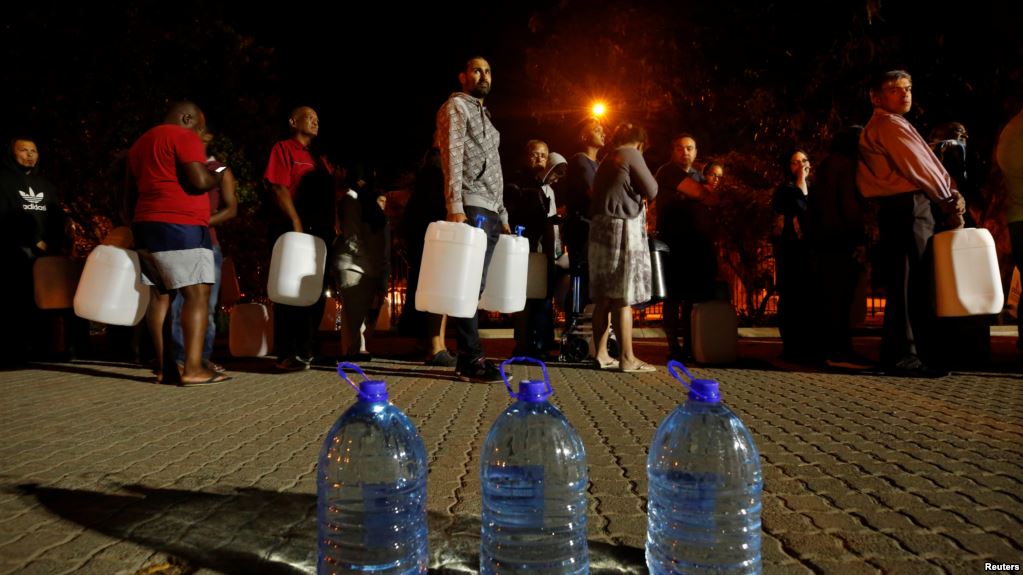 People queue to collect water from a spring in the Newlands suburb as fears over the city’s water crisis grow in Cape Town, South Africa

CAPE TOWN, SOUTH AFRICA — While the South African city of Cape Town drew international attention when it warned it could run out of water this year, an international charity focused on global water supplies says “slow burning” droughts have wreaked even worse devastation in other parts of Africa.

Jonathan Farr leads work on water security for Water Aid, an organization that works to bring clean water to some of the world’s poorest communities, including in southern Africa.

“We should remember that there are already 844 million people in the world who lack basic access to water,” he said. “More than 8 million of those live in South Africa.”

“By the beginning of last year, it affected about 41 million people in countries including Mozambique, Madagascar, Malawi, Zambia and, of course, South Africa,” he said.

And some of those places are in worse shape than Cape Town.

In 2016, Madagascar’s government declared a state of emergency in the country’s south, “with almost a million people facing alarming levels of hunger,” Farr said. Last April, Malawi’s president also declared a state of national disaster, “with 25 out of 28 parts of the country having severe food shortages” related to the drought, Farr added.

In February, Mozambique reduced the water supply by more than half for consumers in its capital city, Maputo, although that order was lifted in April.

But water security is threatened across Africa, and not just because of hotter, drier weather.

“Lots of people are moving from rural communities to cities. The cities aren’t ready for this huge influx of people, and so that’s increasing demand for water, but in a very small area,” he said. “So, it does mean there’s huge pressures on particular water basins. The authorities, even those who are reacting well, are dealing with a very serious problem.”

In many southern Africa nations, water is lost through poor infrastructure, lax maintenance and illegal users. And, Farr said, many governments aren’t effectively collecting usage fees, so they lack the money to maintain and expand water systems.

Farr’s organization cooperates with governments, engineers and architects to assess threats to water supplies — everything from leaking infrastructure to improved water quality.

It also helps to build feasible infrastructure: In Maputo, it’s helping Mozambicans tap into unused water basins near the city.

But if droughts are so much more serious in other parts of southern Africa, why are they largely out of the public eye? Why all the attention on Cape Town?

Farr said there are a few reasons for the international community focusing heavily on the city at the southern tip of Africa.

“You’ve got the deadline of Day Zero and that’s dramatic; it captures headlines, and it’s got this looming threat.”

Day Zero is the point at which authorities will be forced to cut water to most homes, so that people will need to line up at distribution points for daily rations. City officials said it would come when water levels in the city’s reservoirs fell to 13.5 percent of capacity.

Earlier this year, Cape Town officials warned that Day Zero would happen by this month, then recalculated to July. Successful conservation efforts and the onset of the annual rainy season have postponed it indefinitely. However, dam levels remain very low, and stringent water restrictions — eased to 87 liters daily per person from 50 earlier this year — remain in place.

Cape Town’s situation also captured the attention of the developed world because the city of 4 million is much more developed than other drought-stricken areas in Africa, with industry and scientific research in the area.

“So, the potential economic costs there of running out of water are absolutely gigantic,” Farr said. “This is a message that resonates around the world because if Cape Town’s running out of water, there’s lots of cities that also have to look at their own [water] situations and say, ‘Well, maybe this could be us in the not-too-distant future.'”

Cape Town’s conservation efforts, and its plans to invest in alternative water sources, such as groundwater extraction, instead of reservoirs, should be an international example, Farr said.

“It’s not about, ‘Can we spend billions on new infrastructure,'” he said. “It’s not about, ‘Oh, let’s hope for the weather to improve.’ It’s about looking at what are the threats to water, where water comes from and what it’s been used for and can we make sure that’s been done better. And as Cape Town has demonstrated, when you do do it better, you can find significant water resources fairly easily.”