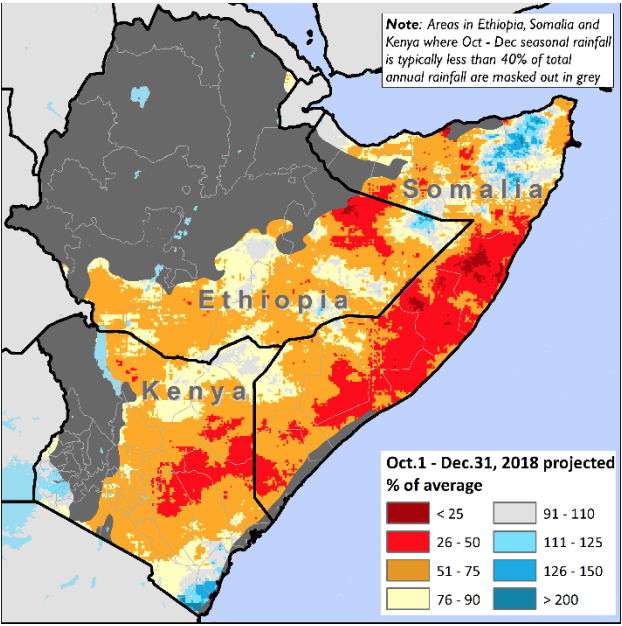 Across the Horn of Africa, rainfall performance during the October to December Deyr/short rains season has been significantly below average and erratically distributed. Based on rainfall to date and the NOAA/CPC forecast through December 31, wide areas of Somalia, Kenya, and southern Ethiopia will accumulate large rainfall deficits (Figure 1). Crop production in Somalia and Kenya is expected to be at least 30 percent below average, and pasture and water availability is likely to be well belo

w average throughout the region. As a result, from February to April 2019, more areas will be in Crisis (IPC Phase 3) than originally projected. Humanitarians should prepare for an increase in need throughout 2019. Although impacts on food security are unlikely to be as severe as those following the failed 2016 Deyr, five out of the region’s last six rainy seasons have been below average and close monitoring of the impacts on crop and livestock production is critical. Early forecasts also indicate an increased likelihood of a below-average 2019 Gu. If this forecast materializes, additional rapid deterioration in acute food insecurity would be likely.

Although there is roughly an 80 percent chance of an El Niño forming in December, there has been a lack of atmospheric response to warming sea surface temperatures, which is important for the enhanced rainfall typically associated with El Niño events. As a result, seasonal rainfall p

erformance has been worse than originally forecast. In addition to below-average rainfall totals to date, the season began up to 30 days late. Despite a short-term forecast of increased rainfall in early December, below-average crop production and below-average pasture and water availability remain the most likely scenario. Rainfall is forecast to cease before late December as tropical rainfall systems shift southward earlier than normal.

Rainfed cereal production in Somalia is anticipated to be 60 to 70 percent of average, with significantly below-average to failed production in some low potential agropastoral areas. In Kenya, marginal agricultural production is anticipated to be 70 percent of average, though Kitui, Makueni, and Taita-Taveta counties may see larger shortfalls. Due to near normal rainfall in the Ethiopianhighlands that has resulted in adequate river water levels, irrigated riverine production in Somalia and southern Ethiopia is likely to be average. Food availability is expected to be most affected in Bay, Bakool, and Togdheer regions in Somalia and in southeastern marginal agricultural areas in Kenya. However, carry-over stocks from the 2018 Gu/long rains harvest are expected to offset below-average Deyr production and stabilize market supply, keeping retail food prices below average through April. This is likely to support food access and enable Stressed (IPC Phase 2) outcomes in many livelihood zones, though Crisis (IPC Phase 3) outcomes are expected in several agropastoral areas of Somalia.

In pastoral areas, poor households still recovering from the effects of the 2016/2017 drought are most at risk of food consumption gaps. In central and northern Somalia and in Ethiopia’s southwestern Somali and southern Oromia regions, regeneration of pasture and water is well below average, and to a lesser extent in southeastern Somali Region. Earlier-thannormal livestock migration is occurring in Somalia, while increased migration is soon expected in Kenya and southern Ethiopia. Reductions in body conditions, milk yields, and market value are likely beginning in January. Given already below-baseline livestock holdings and below-average income from livestock production, previously anticipated livestock asset recovery is unlikely to be realized. Many households are likely to be in Crisis (IPC Phase 3) and will struggle to meet their minimum food needs without food assistance.

Cumulative Deyr rainfall in Somalia appears similar to previous signature drought years, including 2016. In Kenya, current seasonal totals in the southeastern lowlands place this season as one of the three driest short rains seasons since 1981. Despite the very poor 2018 Deyr performance, deterioration in food security outcomes will be partially mitigated through early 2019 by the impact of the March to May 2018 Gu/long rains season, which resulted in bumper harvests and significantly improved livestock conditions across most of the Horn of Africa. Nonetheless, the size of the food insecure population during the first half of 2019 is expected to be larger than previously estimated and additional humanitarian food assistance will be required to prevent food consumption gaps. In addition, early NOAA/CPC forecasts indicate that rainfall during the 2019 Gu is likely to be below average in southern Somalia and southeastern Kenya, though average in the rest of the Horn. Should this forecast come to fruition, historical trends indicate that food security outcomes could rapidly worsen. Therefore, in addition to providing increased assistance during the first part of 2019, national governments and humanitarian partners should prepare for the possibility that a more substantial increase in assistance will be needed later in the year.