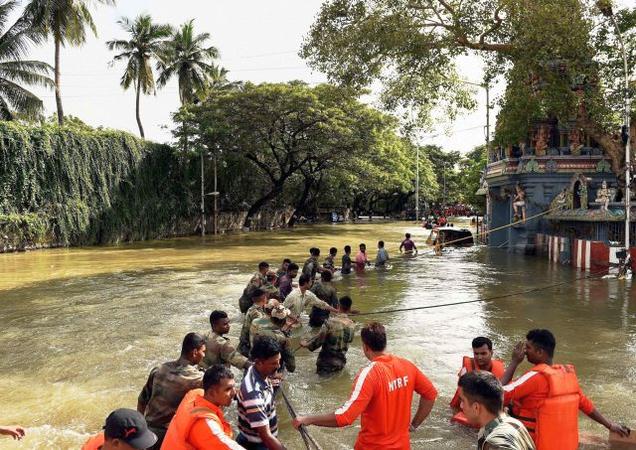 The recent rain in the southern Indian coastal city of Chennai — unimaginably torrential and reportedly as heavy as it once was a hundred years ago — may have been caused by the global meteorological event, El-Nino.

It is said that in the El-Nino years, the water temperature on the surface of the Pacific Ocean rises from 0.5 degree to 1 degree celsius, and this pushes the warm air to rise. And the colder, moisture-laden air, which is responsible for the monsoon rain in India, is drawn away from the mainland. This is why we sometimes see dry spells during the monsoon months.

But during the Indian winter, El-Nino moistens the cyclones which bring rain to states like Tamil Nadu (whose capital city is Chennai, once called Madras), Andhra Pradesh and Orissa — all on the coast of the Bay of Bengal.

This year, El-Nino has been very strong, strongest in about 18 years.

Mahesh Palawat, chief meteorologist of Skymet Weather (a private forecasting agency), says: “In addition to the strong El-Nino, the unusually cold sea surface waters near Tamil Nadu have contributed to the exceptionally heavy rain in Chennai and around. The rain clouds that normally would have gone upwards towards Andhra Pradesh are now turning south towards Tamil Nadu. It is an unusual situation because of the strength of the El-Nino this year.”

A report from the US National Oceanic and Atmospheric Administration adds, “This October was the hottest October on record over the past 136 years”.

The World Meteorological Organization concurs with this view, and adds that October’s strong El-Nino event led to extreme weather patterns. Chennai is a classic example.

Professor OS.R.U. Bhanu Kumar, head of the department of meteorology and oceanography in Andhra University at Visakhapatnam, also blames El-Nino for this recent rain in Chennai.

“Global warming and climate change have begun to show their impact on rainfall and drought pattern down the Vindhyas (a mountain range in southern India),” Kumar says.

However, there a story which goes beyond El-Nino and its effects on climate. A huge metropolis with teeming millions that fancies itself as modern and smart saw utter devastation when the skies opened up. Many parts of the city were waist deep in water which refused to drain into the sea, the Bay of Bengal, on whose coast stands Chennai. There were two important reasons for this.

One, the Buckingham Canal — whose construction was taken up by the British in 1806 — is 796 km long and runs along the sea coast from a point in Andhra Pradesh to a point in Tamil Nadu. It also flows across Chennai.  Once used for navigation, the canal also served as an important means of draining rain water. The rain water which was not absorbed by soil flowed into the canal, which emptied into the ocean.

Two of Chennai’s rivers, Adyar and Cooum, were linked to the canal, and rain water went into the sea through these rivers and the canal.

But now the canal is clogged with the city’s waste and has not been cleaned in years. So, obviously the canal could not serve as a drain during the recent downpour. The water remained in the city and flooded most parts. In some places, the water submerged even the first floors of buildings.

With the reservoirs outside Chennai overflowing, the administration had to release water periodically into the Adyar and the Cooum. Otherwise, the reservoirs would have collapsed leading to such a gush of water that the whole city could have been wiped out.

And with the Adyar and Cooum overflowing their banks, water was rushing into most parts of the city, causing untold damage and suffering.

A simple step like keeping the Buckingham Canal clean could have gone a long way in saving Chennai from the catastrophic flooding.

The other notable cause of the city’s recent woes was mindless urban planning. How can anybody think of building a huge airport on a river bed — which is where excess water flows in.The Chennai airport is built on the Adyar river basin, and now lies under several feet of water. It will remain closed to air traffic till December 6.

Also, any sensible urban planning must leave marshlands alone. The Pallikaranai wetland in south Chennai has been used for building the city’s swanky information technology corridor. Some of the major players like Infosys and Wipro have their complexes there. These have all been damaged.

Now, a marshland is one which soaks in excess water, and with Chennai’s largest, 90-sq-km wetland, Pallikaranai, having gone under brick and motor, it was only to be expected that Chennai would reel under frightening floods.

One commentator rightly quipped on a television news channel, “People are only looking at land, not water”.

Yes, indeed, the greed for land that has turned many into grabbers has left Chennai in this dire state.   Chennai should consider itself lucky that it did not get washed away. Completely.

Gautaman Bhaskaran is an author, commentator and movie critic, who has worked with The Statesman in Kolkata and The Hindu in Chennai for 35 years. He now writes for the Hindustan Times, the Gulf Times and The Seoul Times.