Indonesia is one of the world’s largest emitters of greenhouse gases, but manages to fly well below the radar.

World leaders are gathered this month in Katowice, Poland, for COP24, the most important global meeting on climate change since the 2015 UN Climate Conference in Paris. At the top of agenda: getting countries to agree on rules to implement the Paris climate accords for 2020, when the pact goes into effect.

The meeting serves as a reminder of troubling facts — President Donald Trump still intends to withdraw the United States from the accord, and the most recent UN Intergovernmental Panel on Climate Change (IPCC)’s warns that we have just 12 years to limit average global warming to 1.5 degrees Celsius.

But flying well below the radar in all of this is Indonesia, currently the world’s fifth biggest emitter of greenhouse gases, which come mainly from laTreend use, land use change, and forestry. Today Indonesia stands out for how little it has done to implement policies that would enable it to meet its commitment under the Paris agreement: cutting emissions from deforestation by 29 percent below business-as-usual projections by 2030.

“To really achieve the climate targets … there is a need to come up with new policies that are more ambitious,” Hanny Chrysolite, the forest and climate program officer with the World Resources Institute Indonesia, said.

In fact, Indonesia is moving in the opposite direction. The government plans to build more than 100 coal-fired power plants, and expand the production of palm oil for local biofuel consumption, which will involve further deforestation of carbon-rich tropical forests. Add the expansion of a car-centric transportation infrastructure, a growing middle class and very little investment in renewables, and you have the recipe for a climate disaster. 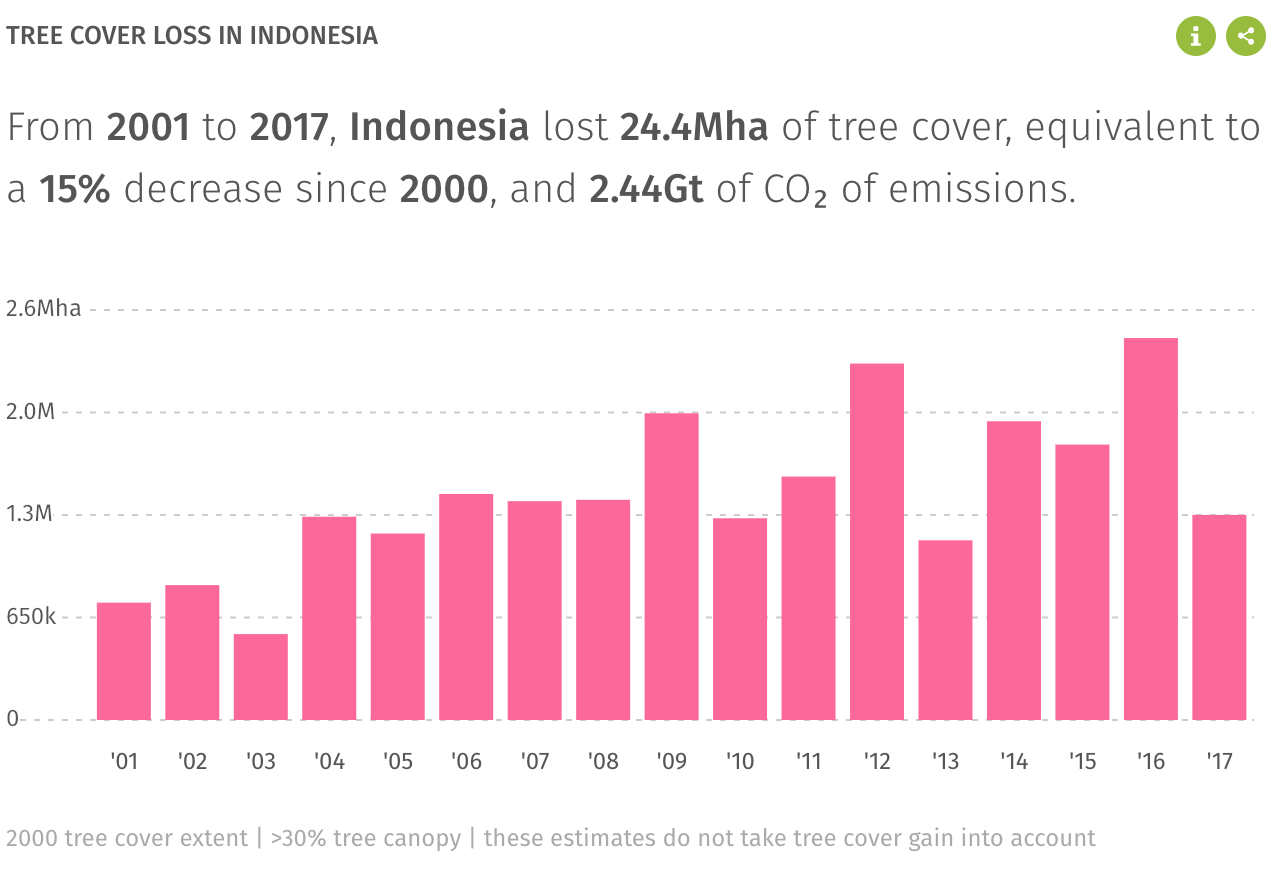 If Indonesia fails to reduce emissions and build a clean energy infrastructure, there is little hope for the world to meet its global climate goals. Like the US, China, India, and Europe, Indonesia is crucially important to the success of the Paris agreement. What’s needed now, climate experts on the ground say, is a rapid mobilization from the Indonesian government, the private sector, and the global community to shift the country to a new climate-conscious paradigm.

Worldwide, emissions from land are responsible for about a quarter of all greenhouse gas emissions, according to data from the World Bank. Indonesia is the largest global contributor to these emissions, spewing 240 to 447 million tons of CO2 annually from agriculture, the conversion of carbon-rich forests to plantations and other uses, according to data from Global Forest Watch.

Tropical rainforests and peatlands — wetland ecosystems that contain peat, a spongy, organic material formed by partially decayed plants — store huge amounts of carbon. According to a Nature Communications paper published in June, one hectare of rainforest converted into a palm oil plantation in Indonesia results in 174 lost tons of carbon.

“The quantity of carbon released when just one hectare of forest is cleared to grow oil palms is roughly equivalent to the amount of carbon produced by 530 people flying from Geneva to New York in economy class,” Thomas Guillaume, one of the authors, said in a statement.

Back in 2015, an extremely dry rainy season connected to a strong El Nino event led to massive fires across the archipelago, particularly on the islands of Sumatra and Kalimantan. They emitted more greenhouse gases into the atmosphere than the United Kingdom does in an entire year.

Unfortunately, there has been little progress towards reducing land-based emissions in Indonesia thus far. Despite the creation of a peatland restoration agency in 2016, followed by the extension of a moratorium on partial forest clearing, satellite monitoring shows that palm oil and paper plantations — the key drivers of deforestation and fires — continue to expand, with at least 10,000 square miles of primary forest and peatland disappearing since 2011, according to an civil society coalition.

“They are doing some good things, but it is not enough,” said Teguh Surya with Yayasan Madani Berkelanjutan, an Indonesian environmental NGO. “Palm oil expansion is still in planning, and on the ground we found some peat areas still open for plantation, there is still weaknesses in law enforcement.”

Essentially, efforts to reduce fires after the 2015 event have had too little an impact thus far, and current plans could make things a lot worse. More than 10 percent of the Indonesian population lives below the poverty line, and the country wants to build 3 million hectares of oil palm and sugar plantation in Papua. If these go forward, advocates worry that they could bring fire problems to the only part of the country with native forests intact and increase the country’s agricultural greenhouse gas emissions even more.

Indonesia’s growing economy and energy demands could make things much, much worse

Here’s where things get even more concerning. Even if all the plans to reduce deforestation succeed, fires are eliminated, and palm oil production is shifted towards sustainable practices, it might not be enough. Indonesia’s fast-growing middle class has an increasing demand for energy. In fact, WRI projects that by 2026 or 2027, energy, not land, will be the largest contributor of Indonesian emissions.

There are two facets to this challenge. One is electricity generation. Indonesia has vast coal reserves, mostly in Borneo, where coal mining is also a cause of deforestation. However, the global coal market has a glut, and Indonesian imports to places like China, South Korea, and India are falling. In response, the Indonesian government had a simple plan; replace this foreign demand with local consumption, through the construction of over 100 new coal-fired power plants throughout the country, 10,000MW of power generation capacity, on top of the existing current 42, making Indonesia one of the last places in the world pushing forward on coal energy.

Then there’s transportation. Indonesia is building new highways and car ownership is growing. Oil imports tripled between 2004-2012, and that’s despite the country’s fairly large oil and gas production capability.

The real tragedy is that Indonesia has immense renewable capacity, with ample wind, solar, hydro and geothermal resources across its many islands. Yet, currently, it is only utilizing a paltry 2 percent of that capacity, and even that is mostly from large-scale hydro — a poor choice for a number of reasons.

Some small signs of hope

If climate finance can get scaled up, this could be a tool to provide substantial funds into forest protection. Jonah Busch, an environmental economist with the Earth Innovation Institute, thinks that Brazil, which dramatically pared its own deforestation between 1996 and 2010 (though the trend has been worrying since then), could be a model for Indonesia to reduce its own deforestation.

“Five, ten, or twenty billion [dollars] for protecting forests would have a much bigger impact,” said Busch. “That would happen when rich countries get much more serious about addressing climate change than they currently are.”

There is potential for clean energy too. A new parliamentary Green Economy Caucus has been created, and there are calls for a renewable energy law, which could level the playing field with fossil fuels. It may not take much support to allow alternatives like solar, wind, and geothermal to compete. In nearby China, India, and Thailand, clean energy is already competing with and beating fossil fuel, years ahead of projections. Indonesia could follow.

“Indonesia recently said that they won’t be contracting for more coal-fired power plants, already too many in the pipeline, and will focus on renewable energy targets and revising air emissions standards,” said Lauri Myllyvirta, an Asian coal and air pollution expert for Greenpeace. “A lot of positive things are happening.”

The question: Can these changes happen fast enough for Indonesia to hit the global targets? Right now, Indonesia’s policies are allowing for deforestation, and are far too fossil-fuel centric. Globally, climate investments and global funds like the maligned Green Climate Fund, which could further incentivize forest protection alongside REDD+, have yet to materialize, with disbursements far behind what was promised at Paris.

Meanwhile, the Trump administration’s abdication of responsibility on climate change means that countries like Indonesia will be less inclined to make the hard decisions essential to radically drawing down emissions.

“The US not taking climate seriously gives a big excuse for the Indonesian government to not take it seriously either,” said Busch. “They have lots of other domestic concerns.”

One thing that could help is stronger requirements from countries that import commodities responsible for deforestation and fires, such as palm oil. Europe — after years of grandstanding — is finally going to revise its biofuels policy to reduce imports of climate-intensive alternative fuels like palm oil. If more countries follow, this could force Indonesia to make the palm oil industry more sustainable.

Financial institutions can also play a greater role. Right now, many foreign banks, particularly those from Japan, are the chief funders of coal-fired power plants. Shifting those investments away from coal and towards clean energy projects could help hasten Indonesia’s move towards clean energy alternatives.

Indonesia can’t solve climate change on its own. But the world can’t stop climate change without Indonesia. Global financial institutions, including banks, funders, and foreign governments, need to do more to reduce deforestation, restore degraded land, and ensure the country does not get locked into decades of burning fossil fuels.